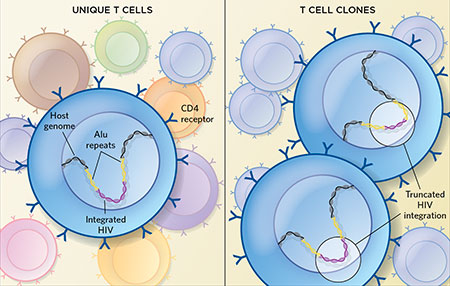 BUTTING IN: HIV integrates genetic material into the genome of a host’s memory T cells, frequently at sites of so-called Alu repeats (above, left panel). Although these cells are suspected of harboring intact, latent viral DNA, researchers have found that clones of an infected T cell have short, dysfunctional integrations and thus likely do not compose the HIV reservoir that can replicate if a patient stops antiretroviral therapy (above, right panel).© KIMBERLY BATTISTA

Antiretroviral treatments have transformed HIV infection from a death sentence to a manageable, though lifelong, condition. But remove the drugs that prevent the virus from replicating, and the infection comes roaring back. Although scientists have long known that somewhere in the bodies of HIV-positive people a latent reservoir of virus lies in...

To test this idea, Lillian Cohn, a graduate student in Michel Nussenzweig’s group at Rockefeller University, and colleagues amplified and sequenced integrated viral DNA (provirus) from patients’ T cells to determine whether each integration was unique or a copy among many cloned cells. Cohn and her colleagues probed the sequences of 75 clones, only to discover that none appeared to have an intact copy of the viral genome. Many seemed to have missing or broken 5’ untranslated regions, and the remainder had either undetectable or heavily mutated viral sequences. “That was unexpected,” Cohn says. “While we didn’t prove completely that the [viral integrations in the] clonally expanded cells are defective, we definitely did make a good case that the majority of the largely expanded clones are inactive.”

Although the researchers may not have found the main source of the latent HIV reservoir, they did notice an interesting pattern in where the virus integrated into the T cells’ genomes. Many of the integrations occurred in stretches of DNA with a particular retrotransposon sequence known as an Alu repeat. This DNA mark might indicate genomic regions that can tolerate viral integration, although this remains to be studied, Cohn says.

It’s still possible that some intact viral DNA may be hidden in the clonally expanded population, the authors note in their paper. Lisa Frenkel, a University of Washington–based infectious disease researcher who has studied the integration of HIV into cancer gene loci, agrees. She cites recent evidence of an AIDS patient whose clonally expanded T cells produced detectable levels of virus in the patient’s bloodstream, suggesting that clonal cells can, at least on occasion, hide the latent virus reservoir. Her own work has found that HIV harboring large deletions can still replicate itself. “When you make 1 [billion] to 10 billion new virions a day and they all have errors, it’s a huge undertaking to really investigate these questions thoroughly,” Frenkel says of the effort to find the definitive source of the reservoir. “It’s kind of a needle in a haystack.”

Determining whether single integrations are the primary source of most latent reservoirs awaits an update of Cohn’s technique, which currently doesn’t allow for the characterization of uniquely integrated viruses. The hunt for the source of the latent viral reservoir is still underway.