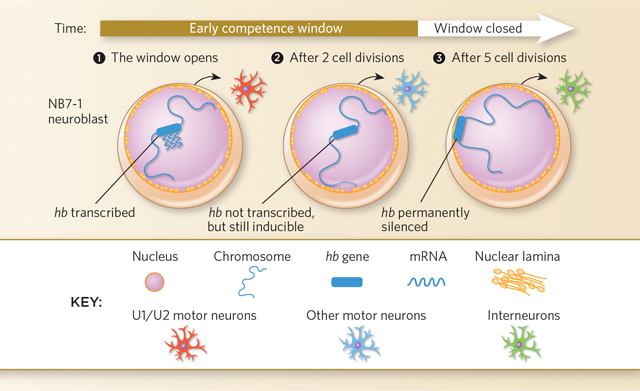 WINDOW OF FATE : In the NB7-1 neural progenitor cell, during the first two cell divisions, when the Hunchback gene (hb) is active and the cell triggers production of U1 and U2 motor neurons, hb is located in the interior of the nucleus (1). It remains there for an additional three cell divisions, during which it is no longer transcribed and the progenitor makes different motor neurons (2). After five cell divisions, the progenitor can no longer generate motor neurons, and hb moves to the nuclear lamina, where it becomes permanantely silenced (3). This suggests that the ability of neural stem cells to make different types of neurons is regulated by the relocation of genes to the nuclear periphery. PRECISION GRAPHICS

To find out, Chris Doe and Minoree Kohwi of the University of Oregon looked at neural progenitor cells called NB7-1 neuroblasts in Drosophila embryos. As they divide, these neuroblasts give rise to smaller cells that form different types of neurons depending on the transcription factor expressed at each division. Previously, Doe had shown that NB7-1s are capable of making two particular types of motor neuron (U1 and U2) only during the first five divisions. After the fifth division, when the so called “early competence window” closes, the cells begin to produce roughly 20 different types of interneurons, cells that form connections between other neurons.

When the early competence window opens, the Hunchback (Hb) transcription factor is expressed, switching on the hunchback gene (hb), which triggers the production of U1 and U2 motor neurons. After two neuroblast cell divisions, Hb is no longer expressed and the neuroblasts generate U3–U5 motor neurons, although hb can still be activated in the postmitotic neuron to make more U1/U2 neurons. After the fifth division, however, hb is permanently inactivated and the NB7-1s can no longer make the early motor neurons.

To find out what renders hb permanently inactive, Kohwi tracked the gene’s location inside the nucleus of progenitor cells in vivo using DNA fluorescence in situ hybridization (DNA FISH), in which a fluorescent probe was attached to hb. When hb was active, the gene appeared at the center of the nucleus, and it remained there even after the first two cell divisions, when it was no longer active. But after five divisions, hb had moved to the nuclear lamina, a dense fibrous network on the inner periphery of the nucleus, where inhibitory proteins typically repress gene activity.

The researchers then looked at the process in mutant flies that produced fewer lamin proteins—the main component of the nuclear lamina—and wild-type flies whose lamin levels were depleted by RNA interference. They noticed a marked decrease in repositioning of the tagged hb gene to the nuclear periphery in both fly strains, which served to extend the competence window. Kohwi also noticed that during early competence, a nuclear protein called Distal antenna (Dan) was abundant in the NB7-1s, but disappeared when hb moved to the lamina. When the team prolonged expression of Dan, movement of hb was delayed and competence was extended by three cell divisions. “Dan is the first protein anybody has found that is positively involved in maintaining competence,” says Doe.

“This work fills in a lot of gaps in our understanding of the regulation of competence,” says Mike Cleary of the University of California, Merced, who was not involved in the study. “The most exciting finding is that temporally regulated changes in the localization of specific regions of chromatin establish these competence states.”