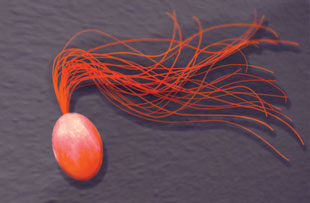 ONE CHILL MICROBE: The archaeon Pyrococcus furiosus normally thrives at 100 °C. Culturing it at a lower temperature can minimize metabolic processes that may interfere with engineered pathways.FULVIO314/WIKIMEDIA COMMONS

The finding
Genetically engineered microorganisms could be used to produce fuels and industrial products, but some microbes’ metabolisms get in the way, degrading or blocking synthesis of the products scientists want. By keeping an extreme heat-loving microorganism below its accustomed temperature, University of Georgia biochemist Michael Adams and colleagues deactivated many of the hyperthermophile’s own metabolic processes and engineered a pathway that could ultimately be manipulated to produce liquid fuel.

The methods
Adams and colleagues took five genes from one archaeon (Metallosphaera sedula) that uses hydrogen gas as an energy...

Correction (September 9): This story has been updated from its original version to refer to Pyrococcus furiosus and Metallosphaera sedula as archaea, not archaebacteria. The Scientist regrets the error.