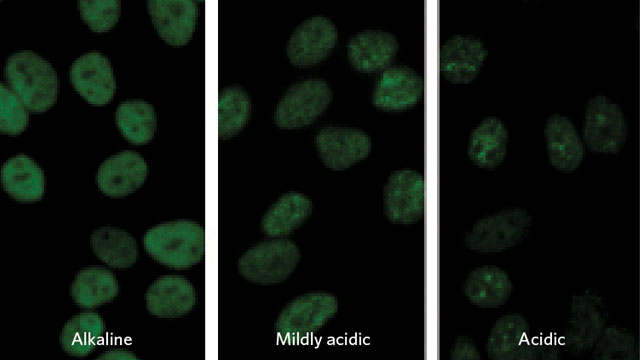 HISTONE pH: As the pH of media decreases from alkaline to acidic, global histone acetylation (green) in HeLa cells diminishes.COURTESY OF MATTHEW MCBRIAN AND SIAVASH KURDISTANI

The problem
Genome-wide levels of histone acetylation—the epigenetic process commonly associated with upregulated local gene expression—are dynamic and can vary widely among cells in different tissues and in tumors. Moreover, scientists have linked low global histone acetylation levels in cancer cells to poor clinical outcomes. Siavash Kurdistani and colleagues at the University of California, Los Angeles, wanted to know what causes these differences and what they mean for the cell.

The formula
Kurdistani and colleagues started tweaking all the components of cell culture media to see what factors might affect acetylation levels. When they lowered the pH of the media, resulting in lower intracellular pH, the global acetylation level also decreased.

The process
The researchers discovered that histone deacetylases help buffer the intracellular pH from the lower extracellular pH by continually removing acetate from histones. Each acetate molecule is then shipped out of the cell along with a proton. Conversely, when they increased the pH of the cell media, which resulted in higher intracellular pH, they recorded an increase in the total amount of histone acetylation.

The product
“This elegant and potentially very influential paper presents data in support of a two-way relationship between gene expression and intracellular acid-base balance,” cellular physiologist Pawel Swietach of the University of Oxford wrote in an e-mail to The Scientist. But, he cautions, the physiological relevance is still uncertain. “The amount of acetate binding (or debinding) to histones may be inadequate to fulfill the task of an effective [intracellular pH] regulator,” he says. 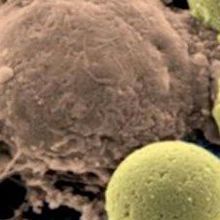