Researchers identified a novel mechanism by which chemically induced stress is “remembered” by the mitochondria of worms more than 50 generations after the original trigger.

Under stress, mitochondria rapidly increase their copy number—that is, the number of mitochondrial genomes in each organelle—as part of a process called the mitochondrial unfolded protein response, or UPRmt. This process prompts the up-regulation of certain stress response genes in the cell’s nucleus. Now, a team has found that roundworms that experienced mitochondrial stress pass on a “memory” of that stress to their descendants by propagating the elevated copy number through the germline.

Chinese Academy of Sciences geneticist Ye Tian and her colleagues had previously found that a signaling molecule called Wnt is involved in the neuronal response to mitochondrial stress. Working with C. elegans, the team created transgenic worm lines that expressed the Huntington’s disease–causing protein Q40 in their neurons, which then started secreting Wnt, initiating the UPRmt in not only the animals’ brains, but their intestines too. Tian also noticed that some worms that had not experienced stress themselves, but whose ancestors had, continued to exhibit the stress response in the intestine, she says. 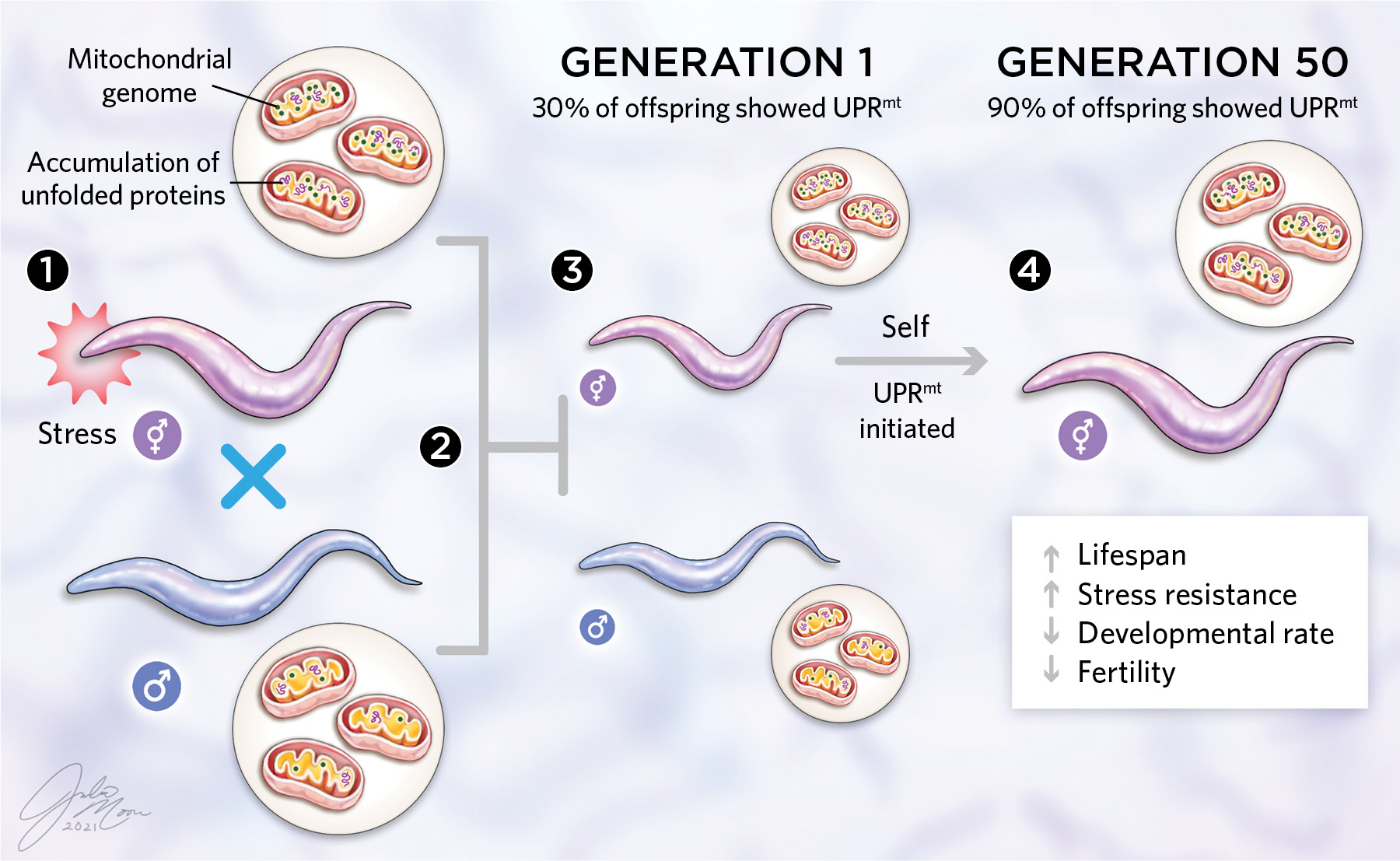 INHERITED STRESS: Exposing neurons of hermaphroditic C. elegans to high levels of either the Huntington’s disease–causing protein Q40 or the ligand Wnt triggers a stress pathway, the mitochondrial unfolded protein response (UPRmt), in many of their cells, including their oocytes. The UPRmt involves elevated copy numbers of the organelle’s genome and an accumulation of unfolded proteins (1). When researchers bred these animals with wild-type males that had not been stressed (2), they found that about 30 percent of the offspring continued to carry a “memory” of that stress, as evidenced by the UPRmt in their tissues (3). This transgenerational inheritance, the researchers found, was mediated by Wnt. Hermaphroditic offspring with the strongest stress responses were allowed to self-fertilize until up to 90 percent of offspring showed the UPRmt inherited from the experience of their ancestors—a “memory” passed down for as many as 50 generations (4). Worms with this stress-primed phenotype had increased resistance to other stressors such as heat and pathogens, and lived longer, but they grew more slowly and were less fertile than controls. WEB | PDF
© JULIA MOORE

To study whether mitochondrial stress might be sending a signal from the brain to the germline, thereby passing down a “memory” of the stress through the generations, the team exposed the neurons of hermaphroditic worms to either Q40 or Wnt, then bred those worms with wild-type males that hadn’t experienced stress. In the first generation, about 30 percent of the offspring, which were hermaphroditic, retained the activation of the UPRmt in their intestine, muscle cells, and oocytes.

The researchers then chose the individuals with the strongest response and allowed them to self-fertilize until roughly 90 percent of the worms showed the high copy number and stress response phenotype, which was retained for more than 50 generations. In other experiments, the team confirmed that the Wnt pathway is necessary for the inheritance of this stress “memory.”

The stress-primed phenotype was a fitness tradeoff: the descendants of stressed worms lived longer and had improved resistance to heat and pathogens, but they also grew more slowly, were slower to reach sexual maturity, and produced fewer offspring than worms with less mitochondrial DNA. “You cannot have all the advantages,” Tian says. “In our case, their mitochondria are under stress, so they develop a little bit slower.”

“They did a nice job of sorting this out, and it’s as good as it gets in terms of methodology,” says Cole Haynes, a cell biologist at the University of Massachusetts Chan Medical School who was not involved in the work. “The findings are sort of remarkable. . . . Neurons telling the germline to make more mitoDNA that will affect the next generation is pretty wild.”