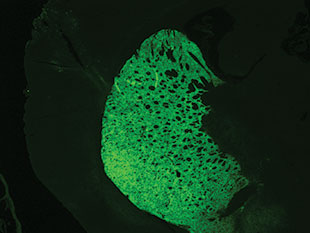 Central station
The striatum, part of the basal ganglia that sit at the base of the forebrain, receives input from the surrounding cerebral cortex to coordinate environmental signals with motor responses. Although it’s known that striatal neurons process different types of sensory stimuli, the temporal and spatial organization of this processing is not well understood. Ramon Reig and Gilad Silberberg of the Karolinska Institute in Stockholm measured responses to visual and tactile cues in individual striatal neurons of living mice.

Delicate work
To prevent interference from motor activity, Reig and Silberberg anesthetized the mice, leaving their sensory abilities intact. The researchers delivered a puff of air to...