When Huang-Ge Zhang was younger, his parents would often make him ginger tea when he was ill. Now, as a microbiologist at the University of Louisville in Kentucky, Zhang investigates the mechanisms through which ginger and other edible plants might affect health.

In previous studies, he had found that exosome-like nanoparticles (ELNs)—small extracellular vesicles that often contain RNA—derived from plants such as broccoli and ginger can help prevent alcohol-induced liver damage and artificially induced colitis in mouse models. Recently, when he sequenced ginger-derived ELNs (GELNs), he found that they contained many microRNAs. This made him wonder whether the edible plant RNA could be taken up by gut bacteria and drive expression of bacterial genes—something that human fecal microRNAs have been shown to do in mice. 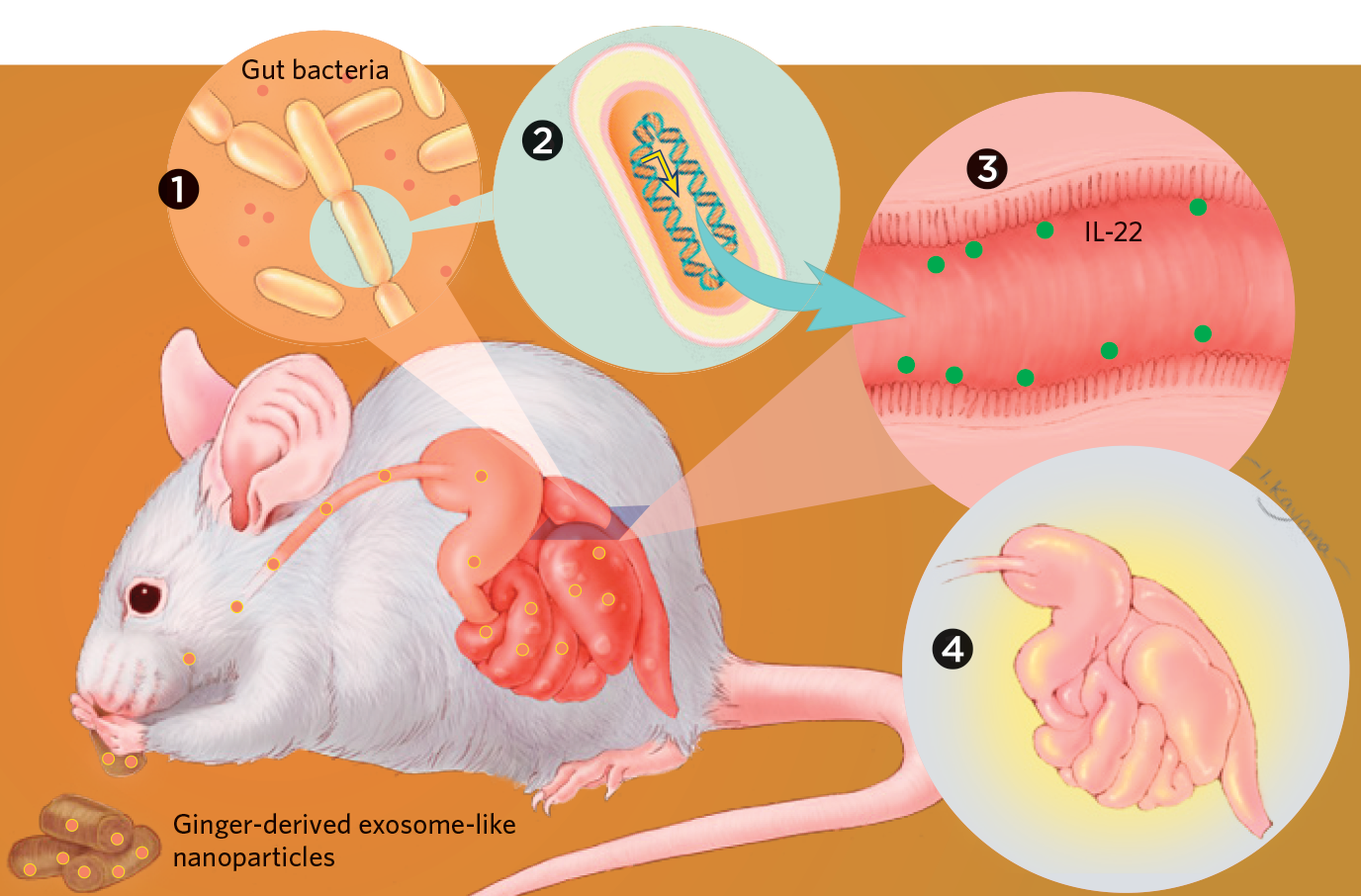 GINGER FEAST: Using a mouse model of colitis, researchers studied the effects of ginger-derived exosome-like nanoparticles (GELNs) on gut flora. The team found that GELNs are preferentially taken up by Lactobacillus gut bacteria, and boost their abundance (1). The particles contain microRNAs, which stimulate a suite of bacterial genes (2). In particular, they activate a pathway that results in the expression of interleukin-22 in colon mucus (3). This is believed to promote tissue repair and antimicrobial immunity, ultimately improving colitis symptoms in the mice (4).
See full infographic: WEB | PDF
© Ikumi Kayama, Studio Kayama

To find out, Zhang and his colleagues fed purified GELNs to mice, and analyzed the makeup of their gut microbes by sequencing the 16S rRNA gene. The researchers found a substantial increase in Lactobacillaceae—a family of beneficial bacteria often used as probiotics—in GELN-treated mice compared to mice given a neutral medium. In vitro cultures also showed that GELNs promoted the growth of Lactobacillus rhamnosus and several other Lactobacillus species—but ELNs from grapefruit had the opposite effect.

To see if the GELN mechanism could translate to beneficial health effects, Zhang and his collaborators induced colitis in mice using the chemical dextran sulfate sodium, which causes ulcers and lesions in the gut lining similar to human colitis. After consuming GELN RNAs, the mice showed improvements in their colitis symptoms. By contrast, control mice that had been given particles of scrambled RNA encapsulated in GELN-derived lipid did not.

Further experiments suggested that the microRNAs contained in GELNs activate a suite of bacterial genes, including an enzyme in L. rhamnosus that activates a pathway that triggers the expression of the cytokine IL-22 in colon mucus. IL-22 has been shown in other studies to promote tissue repair at the gut lining, and is therefore thought to ameliorate colitis symptoms.

Zhang says the results are a proof of concept that plant-derived ELNs can affect microbiome composition and health, and present “a new avenue for future studies.” He is in the process of constructing a library of other ELNs derived from vegetables and fruit—“not just ginger,” he says—so that he can test how they affect the microbiome.

For University of Minnesota geneticist Ran Blekhman, who was not involved in the study, the findings illustrate “a remarkable mechanism of these interactions between the diet, the microbes, and the host.” Many studies establish correlations between dietary interventions and changes in the microbiome, whereas very few examine the molecular mechanisms involved, he notes. “In general, there should be a lot more studies like this.” 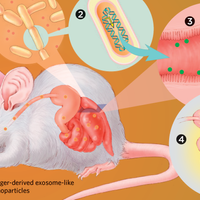