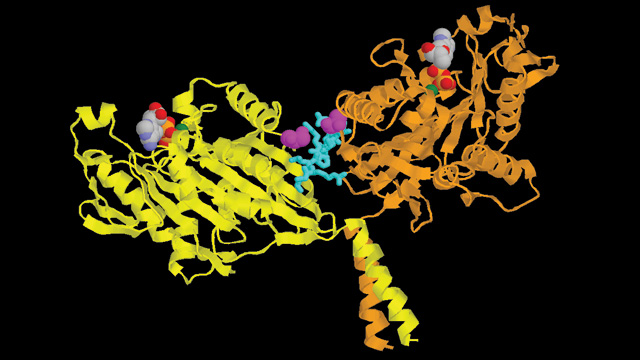 In a major advance of work that he began 11 years ago, Frank Kozielski, at the Beatson Institute for Cancer Research in Glasgow, revealed a critical component of the structure of kinesin-1—a motor protein involved in shuttling cargo throughout the cell. The structure helped settle a debate about how the molecule stays inactive until it has cargo to transport.

Researchers knew that kinesin would halt when the tail domains—with their two motor heads that walk along the microtubules—were not attached to cargo, but they didn’t know how. Some researchers proposed that the tail would change the shape of the motor so it could not function; others proposed that...

Kozielski’s group demonstrated that one tail of kinesin-1 folded down to the motors and bound its dimerized heads so that they could not release ADP—a molecule of spent fuel. With the pocket occupied by ADP, fresh fuel in the form of ATP could not bind and set the molecule in motion.

“The new result highlights the individuality of different kinesins,” which belong to a family of some 45 proteins with different shapes and mechanisms, says Linda Amos from the Medical Research Council Laboratory of Molecular Biology in the UK. With the structure of kinesin-1 known, researchers now have “a template to look at the others,” says Kozielski.