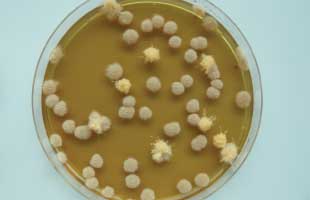 KIN KINKS: Sporulating fungal colonies (orange) are rarer in strains evolved under low-relatedness conditions due to the evolution of cheaters (tan).ERIC BASTIAANS

Cheating cooperation
Genetic similarity among cells is probably an important factor for successful multicellularity, as suggested by studies of varying relatedness among the fruiting bodies of myxobacteria or Dictyostelium—which form by aggregation of cells, not by clonal expansion from a single cell. That work showed cheating can increase with decreased relatedness , but in these models it has not been possible to make comparisons in which relatedness is the only variable.

Familial fungi
Duur Aanen of Wageningen University in the Netherlands and his graduate student Eric Bastiaans found a model to overcome that problem: the bread mold Neurospora crassa. These filamentous fungi grow either clonally—by mitosis—or by fusion with less-related cells, which creates chimeric strands. Bastiaans and Aanen evolved 31 generations of a mutant line unable to fuse—which yielded highly related progeny—and a standard strain, with lower relatedness due to fusion. They found that more cheaters arose in the standard strain, which had a lower spore yield because the cheaters neglected their somatic functions.

Explaining evolution
David Queller of Washington University in St. Louis, who has done similar work in Dictyostelium, praises the creative use of Neurospora and calls the work a “significant advance.” It’s a rare experimental-evolution study of cooperation, and “the only one that did a proper low-relatedness and high-relatedness treatment,” Queller says.

Societal impact
Aanen plans to study the dynamics of fungal cultures in which cheating and cooperative cells coexist—work that might help explain the structure of human organizations with too few team players. “There are so many interesting parallels in human societies,” he says.