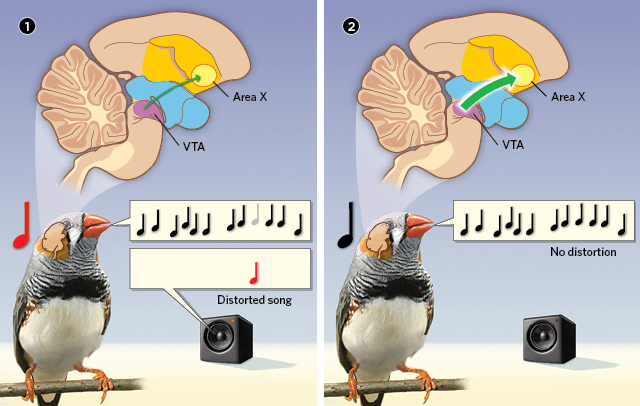 NEGATIVE FEEDBACK: In the brain of male zebra finches, dopaminergic neurons (green arrows) project from the ventral tegmental area (VTA) to Area X, a region known to be required for song learning. Researchers from Cornell University found that these neurons encode singing errors by suppressing dopamine signaling when the bird hears itself producing an incorrect note, which researchers simulated by the introduction of distorted audio feedback at specific syllables (1)—and boosting dopamine signaling when the bird correctly produces a note that sounded incorrect in previous attempts (2).© PENS AND BEETLES STUDIOS

Recognizing when you’re singing the right notes is a crucial skill for learning a melody, whether you’re a human practicing an aria or a bird rehearsing a courtship song. But just how the brain executes this...

Gadagkar suspected, as others had hypothesized, that internally driven learning might rely on neural mechanisms similar to traditional reward learning, in which an animal learns to anticipate a treat based on a particular stimulus. When an unexpected outcome occurs (such as receiving no treat when one was expected), the brain takes note via changes in dopamine signaling.

So Gadagkar and his colleagues investigated dopamine signaling in a go-to system for studying vocal learning, male zebra finches. First, the researchers used electrodes to record the activity of dopaminergic neurons in the ventral tegmental area (VTA), a brain region important in reward learning. Then, to mimic singing errors, they used custom-written software to play over, and thus distort, certain syllables of that finch’s courtship song while the bird practiced. “Let’s say the bird’s song is ABCD,” says Gadagkar. “We distort one syllable, so it sounds like something between ABCD and ABCB.”

The team found that birds who listened to songs with the distorted syllable had less neural activity among dopamine-producing neurons in the bird’s brain. “That’s exactly what we were looking for,” says Gadagkar. “There’s a signal in the VTA saying, ‘Ah, this is not what I wanted to hear; the song is not right.’ ”

Although the observations reveal correlation, not causation, between singing errors and dopamine signaling, Gadagkar’s work provides “powerful” support for the idea that dopaminergic neurons help mediate internally driven learning, says Richard Mooney, a neurobiologist at Duke University. “It’s an important result,” he says. “In some sense, it’s expected, but this is one of these cases where confirming a long-standing prediction is really valuable.”

The researchers also found something they weren’t looking for. After many trials, the zebra finches began to respond differently to their own songs: when the birds heard a correct syllable that had been distorted in previous trials, VTA neurons showed higher dopamine activity than normal. “We interpret that as a ‘better-than-expected’ signal,” Gadagkar explains. “This means that the birds are not just comparing what they sang to the template. They’re also comparing it to their recent practice.”

This finding is particularly intriguing and deserves further study, notes Mooney. “I’m dying to know what the time [aspect] of this memory function is,” he says.

Gadagkar is now exploring dopamine-based song evaluation in the presence of the bird’s intended audience: a female. “These birds sing in two modes, practice and performance,” he says. “When he’s singing to a female, it’s game on. So what happens when you sing to a female and make a mistake?”