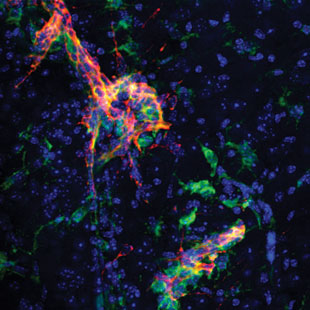 REBIRTH: Astrocytes (green) in the mouse brain can be reprogrammed into neuronal precursors (red), which can then develop into neurons (nuclei in blue). WENZE NIU

The finding
Scientists have coaxed differentiated cells to become neuronal progenitor cells many times in vitro. But this had not been accomplished in vivo until Chun-Li Zhang of the University of Texas Southwestern Medical Center in Dallas tried injecting different combinations of reprogramming candidates into the brains of older mice. Zhang’s group found that injection of a single transcription factor—SOX2—is necessary and sufficient to convert nonneuronal cells to neuronal precursors called neuroblasts, which can then become functional neurons.

The experiments
The research team used lineage tracing to determine that the cells responding to SOX2 were a type of glial cell called an astrocyte. Once generated, the astrocyte-derived neuroblasts lived in the brains of the mice for more than 14 weeks. The researchers then enticed the neuroblasts to become neurons by exposing them to factors that promote neurogenesis. Later, electrophysiology of the mature neurons in brain slices demonstrated that the cells functioned normally.

The future
The authors have done an initial characterization to show that the generated cells have the properties of neurons, said Rebecca Ihrie of Vanderbilt University, who was not involved in the work. She added that next it will be important “to know in much more detail what kind of neurons” can be produced.

The applications
The clinical utility of generating neurons on demand is vast, from repairing neural damage to treating neurodegenerative disease. One possibility Zhang offered is that for Parkinson’s patients, scientists could “specifically generate dopaminergic neurons from patients’ own astrocytes.” Such therapies, if developed, are many years away. 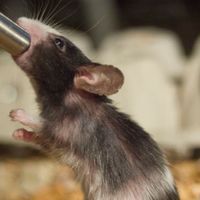