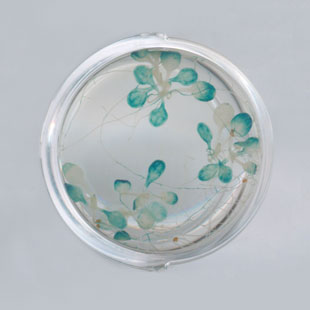 The question
In his quest to uncover the ways organisms ward off pathogens, Fred Ausubel at Massachusetts General Hospital and his lab had been looking for molecules (referred to by those in the field as MAMPs—microbe-associated molecular patterns) present in the pathogenic bacterium Pseudomonas aeruginosa that could spark a response in Arabidopsis.

The answer
What the team turned up was unusual: a P. aeruginosa–secreted protease. Other MAMPs known to trigger an innate immune response in plants don’t exhibit enzymatic activity. “It was kind of surprising,” says postdoc Zhenyu Cheng, who led the study. “So we tried to identify the components involved in detecting this protease.”

What united these signaling components, they figured out, was the scaffolding protein called receptor for activated C kinase 1 (RACK1). The G protein-RACK1-MAPK pathway represents an immune response in plants that had been completely overlooked before, says Ausubel.

RACKing up roles
RACK1 is a widely conserved protein involved in numerous cellular activities. Howard University’s Hemayet Ullah, who studies RACK1 signaling in plants, says it’s not entirely surprising the protein is involved in plant immunity too. “How this protein remarkably coordinates so many functions is a mystery.”