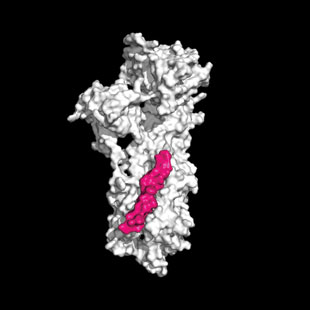 The transcript
Eric Olson and his colleagues at the University of Texas Southwestern Medical Center were combing through muscle-specific long noncoding RNAs (lncRNAs) to understand their function when they found one expressed exclusively in skeletal muscle. Although the RNA had previously been categorized as noncoding, its sequence contained a short stretch that looked suspiciously like a coding region.

The micropeptide
The researchers verified that the RNA encoded a 46-amino-acid micropeptide expressed in vivo that they named myoregulin. Myoregulin forms a membrane-spanning alpha helix similar in structure to two other small proteins expressed in cardiac and slow skeletal muscle, phospholamban (PLN) and sarcolipin (SLN).

The regulator
PLN and SLN inhibit the activity of SERCA, a membrane protein that pumps calcium out of the cytoplasm and into muscle-cell compartments to help muscles relax. Myoregulin also inhibits SERCA, providing a “dimmer switch” for muscle response to calcium in tissues where PLN and SLN aren’t normally expressed, Olson says. Removing the regulator can enhance athletic ability; myoregulin knockout mice ran 31 percent longer than wild-type animals.

The hunt
Not all lncRNAs encode small proteins, but “there will undoubtedly be a very large number of tiny peptides encoded by misannotated lncRNAs,” Olson says. Already, several hundred of them have been found, and myoregulin’s functional similarity to PLN and SLN—despite limited conserved residues—is “a wake-up call,” says Antonio Giraldez of Yale University School of Medicine. “[W]e really need to be more aware of looking for conserved regions or looking for translated regions within these noncoding RNAs.” 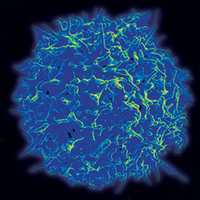