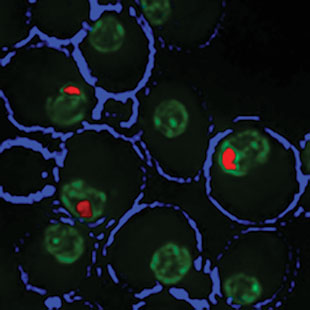 DETENTION: In yeast, malformed nuclear pore complexes (red) are separated from properly built complexes (green) and not passed on to daughter cells.BRANT WEBSTER

The construction
Building the nuclear pore complex—gatekeeper to the genome—is no small feat for a cell; hundreds of proteins assemble to traffic content between the nucleus and the cytoplasm. To Patrick Lusk, a cell biologist at Yale University, it seemed likely that the assembly process, albeit essential, might fail on occasion. So his group set out to find whether there are any quality-assurance mechanisms to keep the assembly in order.

The surveillance
Conducting genetic assays in yeast, Lusk’s group identified the ESCRT-III complex as responsible for monitoring nuclear pore assembly and clearing malformed complexes. ESCRTs are known to bend membranes and assist in endocytosis and cytokinesis, so it’s not terribly surprising that they also patrol a process that impacts the double membrane of the nuclear envelope, says Lusk. These are also ancient machineries—present since the last common eukaryotic ancestor—and as such “have been repurposed throughout the cell,” he says.

The dump
If the surveillance process fails and defective complexes arise, the yeast cell’s means of dealing with them is to lump them into a compartment of the nuclear envelope that Lusk’s group dubbed the SINC, for storage of improperly assembled nuclear pore complexes. Locking them up ensures that daughter cells don’t inherit subpar nuclear pores.

The impact
Michael Rout of Rockefeller University says Lusk’s identification of quality-assurance mechanisms has opened up an entirely new chapter on nuclear pores. The study has “revealed the depths of our ignorance” of the process of nuclear pore complex assembly, he says. “It’s really exciting.”