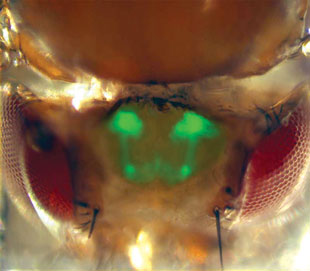 VISUALIZING SMELL: Neurons in the mushroom bodies of Drosophila, shown in this composite image, help the flies discriminate among a large number of odors.COURTESY OF ROB CAMPBELL AND GLENN TURNER

The finding
In the fruit fly (Drosophila melanogaster), pheromones and other highly salient odors have direct neural links to the brain from antennal olfactory receptor neurons. However, there are more smells that the flies must distinguish than there are odor-processing neurons, says Glenn Turner, a neuroscientist at Cold Spring Harbor Laboratory in New York. Imaging the brains of flies exposed to different smells, Turner and colleagues discovered that many odors are encoded by small, nonlocalized ensembles of neurons, allowing the insects to discriminate among vast numbers of closely related scents....