With their tiny brains and renowned ability to memorize nectar locations, honeybees are a favorite model organism for studying learning and memory. Such research has indicated that to form long-term memories—ones that last a day or more—the insects need to repeat a training experience at least three times. By contrast, short- and mid-term memories that last seconds to minutes and minutes to hours, respectively, need only a single learning experience.

Exceptions to this rule have been observed, however. For example, in some studies, bees formed long-lasting memories after a single learning event. Such results are often regarded as circumstantial anomalies, and the memories formed are not thought to require protein synthesis, a molecular feature of long-term memories encoded by repeated training, says Martin Giurfa of the University of Toulouse. But the anomalous findings, together with research showing that fruit flies and ants can form long-term memories after single experiences, piqued Giurfa’s curiosity. Was it possible that honeybees could reliably do the same, and if so, what molecular mechanisms were required? 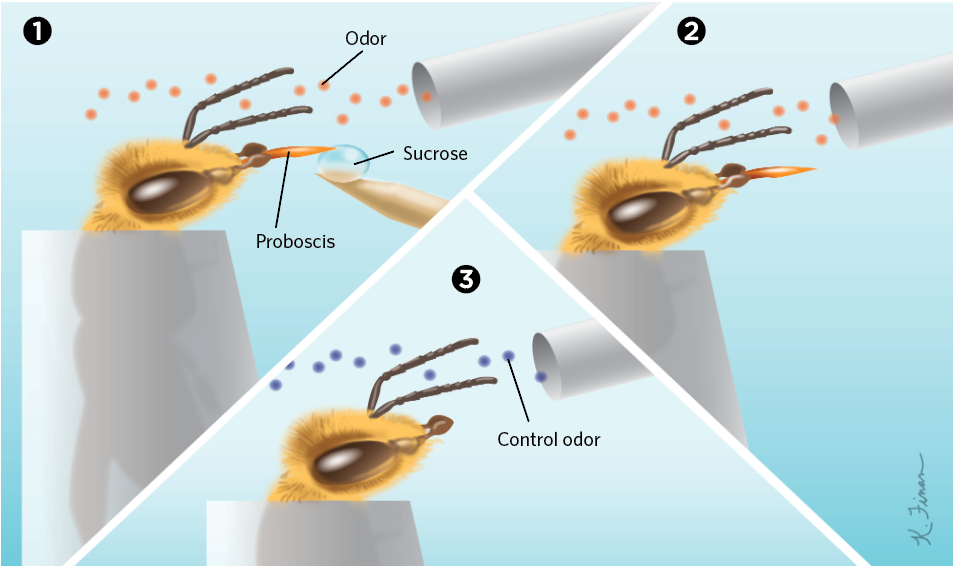 QUICK LEARNERS: Forager honeybees are exposed once to an odor while simultaneously receiving sucrose via a cocktail stick. The insects extend their proboscises to drink the sugary treat (1). At 1 hour, 4 hours, 24 hours, or 72 hours after this experience, the bees are exposed to the same odor or to a control odor. At times up to 24 hours, most bees correctly extend their proboscises in response to the paired odor (2) and not the control one (3). Even at 72 hours, approximately one-third of the trained bees do the same. WEB | PDF
© Kelly Finan

Giurfa reasoned that the ability to form robust memories might depend on the particular type of bee and the experience. Within a honeybee colony, there are nurses, who clean the hive and feed the young; guards, who patrol and protect the hive; and foragers, who search for nectar. Whereas previous studies have tested bees en masse, Giurfa and his colleagues focused on foragers, tasking them with remembering an experience relevant to their role: an odor associated with a sugary reward.

The researchers observed that a single exposure to a reward-paired odor was enough for most forager bees to remember that specific odor the following day: they extended their proboscises when exposed to the odor but not when exposed to an unrelated scent. Many foragers could even remember the odor three days later.

It is possible that nurse and guard bees differ in their learning capacities and molecular makeups, and that this explains the differences to prior studies, says Giurfa, but this is untested.

The results do not mean that all prior research was wrong, says André Fiala of the University of Göttingen who studies fruit fly memory and was not involved in the project. “People have done the experiments in a different way.” Still, the new results do show that “the commonly held belief that one needs multiple training trials . . . to achieve long-term memory is not always true,” he says, and this “really advances the field.”