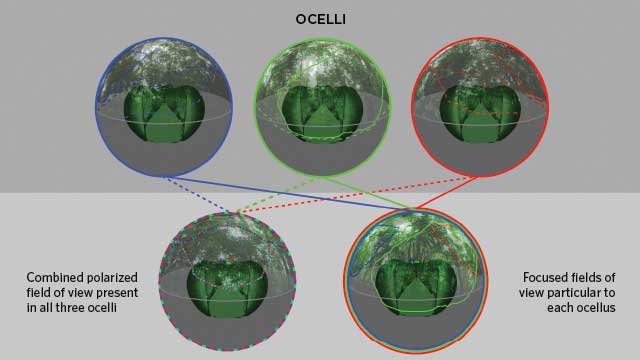 THREE IN ONE: The three ocelli (top row), or simple eyes, of an orchid bee contain two fields of view. The polarized-light field of view is shared among all three ocelli to provide a trinocular view of the sky (dashed lines in bottom row, left), which potentially acts as a navigational aid as the bee flies through its dense, canopy-covered rainforest habitat. The solid lines represent each ocellus’s second, unique field of view produced by the perception of focused light.CURR BIOL, doi:10.1016/j.cub.2016.03.038, 2016. REPRODUCED WITH PERMISSION.

For neuroscientist Emily Baird, a researcher who describes her passions as “animals, behavior, flying, and robots,” bees have always offered a fascinating study system. But in recent years, Baird, the head of a research...

While honeybees and bumblebees fly through relatively open habitats, for instance, decelerating to land on appealing flowers, other species, such as orchid bees (Euglossa imperialis), hurtle through the cluttered and ill-lit undergrowth of tropical rainforests. “I was interested in understanding how a bee that lives in the rainforest manages to detect and avoid obstacles while flying at really high speeds,” Baird says, adding that this question essentially boils down to, “How do they really use vision?”

In addition to two large compound eyes, bees and many other flying insects have three simple eyes, or ocelli, located on the tops of their heads. These structures have traditionally been thought of as flight stabilizers, which allow insects to orient their bodies relative to the horizon. But much of the understanding of the ocelli’s structure comes from traditional microscopy—a technique that involves slicing up samples. “You lose resolution in one direction,” says Baird, “so you can’t really make good three-dimensional models of the eyes. And you also don’t know how they’re sitting in the head.”

To understand the visual inputs an orchid bee uses during flight, Baird and her colleagues tried another technique, X-ray micro-computed tomography, to model light reception by the ocelli in three dimensions. To their surprise, they discovered that each simple eye has not one, but two visual fields. “These eyes essentially have at least two different areas in them that are looking at different parts of the world,” Baird explains.

One area, aimed at the horizon, receives focused light that likely aids flight stabilization. But another area receives unfocused light from above. Taking a closer look, the researchers found that the photoreceptors in this area of each ocellus are sensitive to the orientation of polarized light—a potential navigational cue. “As long as you can see the sky and are sensitive to polarized light, as many insects are, then you can actually use this as a compass reference,” Baird says. “We predict that these eyes are acting like polarized-light analyzers.”

“It’s a very nice paper,” says neuroscientist Holger Krapp of Imperial College London. “The function of the ocelli was not entirely understood in many different insects. . . . This paper suggests really that there are two different aspects of visual information that can be used in different contexts.” He adds that behavioral experiments could provide supporting evidence that orchid bees really use light polarization to navigate during flight.

The Lund team already has behavioral experiments underway in orchid and other bees, says Baird, although separating information from the compound and simple eyes will be challenging. “We know that part of the large compound eyes are also sensitive to polarized light,” says Baird. “So it’s a bit of a mystery why they have this extra area of polarization sensitivity. That’s something we have to continue researching to understand.”