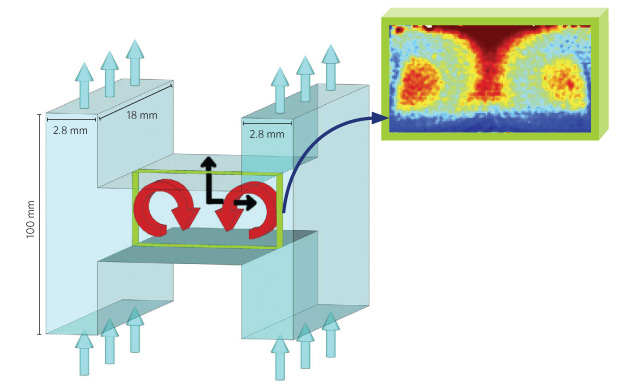 CONTROLLED CHAOS: In a device built to image the spatial distribution of the phytoplankton H. akashiwo, water flowed upward along two outer chambers and spilled into a connecting horizontal chamber filled with the cells, creating two counter-rotating vortices (above, red arrows). Researchers illuminated the central plane of the chamber (green rectangle) with a laser sheet. The cells aggregated in downwelling regions, at the top of the chamber, and in the vortices’ cores (inset top right). Dead cells (not shown) were randomly distributed.COURTESY OF WILLIAM DURHAM AND ROMAN STOCKER, NATURE COMM, 4:2148, doi:10.1038/ncomms3148, 2013.

Phytoplankton play a key role in oceanic food webs and produce half of the planet’s breathable oxygen. Though they are distributed globally, these microscopic, photosynthetic algae can form dense, kilometer-long patches,...

Roman Stocker, an environmental engineer at the Massachusetts Institute of Technology, and his colleagues brought phytoplankton into the lab to study the mechanisms underlying microscale patchiness. However, “imaging these organisms in a fully turbulent environment would be too messy,” says Stocker. So his team built a device to create vortices, the building blocks of turbulence. The H-shape device directs water upward along two parallel columns that then spills over into a connecting horizontal chamber. The flows from the two columns converge in the middle of the horizontal chamber, creating a miniature, downward-directed vortex at each end of the horizontal chamber.

The team used video microscopy to capture the distribution of Heterosigma akashiwo, which can form toxic algal blooms on the ocean’s surface. The video showed that these motile cells aggregated in downwelling regions between the two vortices, at the top of the horizontal chamber, and in the vortices’ cores. In contrast, control experiments revealed that dead H. akashiwo were randomly distributed by the turbulence.

Motile phytoplankton are known to whip their hairlike flagella back and forth to bias their swimming in the vertical direction, allowing them to soak up sunlight during the day and to descend into deeper, nutrient-rich water at night. Computer simulations by Stocker’s group suggested this bias can also counter forces exerted by the chamber’s vortices that would cause the cells to tumble. It’s this turbulence-driven directional bias that keeps the swimming algae moving toward a common location. “I think this work will be really useful in improving ecosystem models of the ocean, which currently don’t resolve any of this small-scale variability,” says John Taylor, an oceanographer at the University of Cambridge who was not involved in the research.

Stocker says that small-scale patchiness is important for bringing phytoplankton close together for reproduction and to excrete large quantities of toxins that thwart competitors. However, clumping can also increase competition for nutrients and make the organisms an easy target for predators. Stocker speculates that the phytoplankton can avoid these fates by simply swimming more slowly or changing the stroke of their flagella—moves that would allow turbulence to spread them out. In future experiments, he will study the interaction of multiple phytoplankton species, as well as predators. Taylor says those experiments could help determine which algal species will proliferate under different ocean conditions, allowing oceanographers to more accurately predict harmful algal blooms.