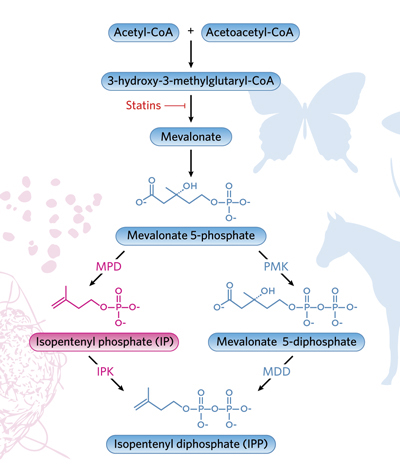 The first steps in the biosynthesis of cholesterol are collectively called the mevalonate (MVA) pathway and result in the generation of isopentenyl diphosphate (IPP). The synthesis of IPP is essential in all organisms as a starting point for the formation of isoprenoids—a large group of compounds that include cholesterol, hormones, and signaling molecules, and...

Bacteria, archaea, and eukaryotes take different tacks to produce IPP. Eukaryotes generally use the classic five-step MVA pathway, while plant chloroplasts and most bacteria employ a distinct route called the DXP or MEP pathway. In archaea, the first three steps of the MVA pathway overlap with the eukaryotic route, but the discovery of the enzyme isopentenyl phosphate kinase (IPK) in 2006 revealed a slightly different ending. In the final step of this alternate pathway, IPK adds a phosphate to isopentenyl phosphate (IP)—IPP’s direct precursor. The enzyme catalyzing the step preceding this event, however, remained undiscovered.

HHMI investigator Joseph Noel of the Salk Institute for Biological Studies in La Jolla, California, and colleagues were interested in reengineering IPK to generate isoprenoids more efficiently. Along with studying plant metabolite evolution, Noel is also the founder of two companies that commercialize isoprenoids.

After solving the crystal structure of IPK in 2010, Noel’s graduate student Nikki Dellas experienced a moment of what Noel calls “serendipity in science.” The crystal structure revealed residues important for the enzyme’s function. Dellas then used these “signature sequences” to find and biochemically characterize seven putative homologs of IPK across all three domains of life. Each homolog was capable of phosphorylating IP. “This particular activity is widespread in nature,” says Noel. “That was completely unexpected.”

As the researchers studied IPK, a not-well-characterized phylum of green, non-sulfur bacteria called Chloroflexi caught their attention. Initial examination of the genome of one Chloroflexi species, Roseiflexus castenholzii, indicated that the microbes used the classic, eukaryotic MVA pathway. But a closer look showed that this species also encoded a functional IPK homolog and was missing one gene from the MVA route. This suggested that the bacteria were following a different biochemical course to generate IPP.

Last year the team identified the missing piece of the R. castenholzii puzzle: an enzyme, mevalonate phosphate decarboxylase (MPD), which catalyzes the penultimate step of IPP production. Their discovery uncovered a unique branch of the MVA pathway, one that could also fill in the gap of how archaea produce IPP. Another group later confirmed that at least one species of archaea indeed uses MPD.

“[This work] is really unique and exciting. What it actually suggests is that there’s a lot of diversity in [isoprenoid] biosynthesis in living organisms,” says Claudia Vickers, a senior research fellow at the University of Queensland. “There are probably variations on those pathways in all kingdoms of life.”