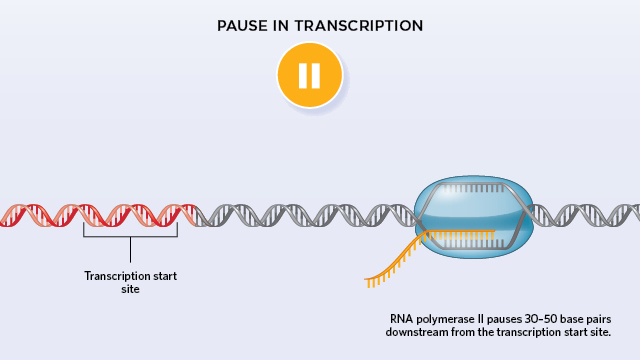 POLYMERASE INTERFERENCE: During gene expression, multiple RNA polymerase II enzymes commonly transcribe a gene simultaneously. But if a polymerase pauses on the gene, no new transcription is initiated until it restarts.
See full infographic: WEB © PENS AND BEETLES STUDIOS

When it comes to regulating gene expression, transcriptional initiation tends to get a lot of attention. But it’s become clear in the past decade that RNA polymerase II, the enzyme that transcribes DNA to RNA, frequently pauses after reading just a few dozen base pairs. This break surely affects gene expression rates—though its impact has not been obvious. Julia Zeitlinger and graduate student Wanqing Shao of the Stowers Institute for Medical Research in Kansas City, Missouri, recently found that as long as RNA polymerase remains stalled, very little new transcription...

Zeitlinger and Shao came to this conclusion by using a drug to freeze RNA polymerase II and transcription factors in place in Drosophila cells, then analyzing the positions of polymerases throughout the genome with a technique called ChIP-nexus. “We could clearly see minimal initiation in the presence of paused polymerase,” she says. The result was initially surprising, she adds, because it’s been shown that promoters with a strong propensity for downstream polymerase-pausing are associated with faster gene expression in response to a developmental signal.

“I think that the idea of having one rate-limiting step is sort of appealing, and a lot of biologists sort of intuitively think that way,” she says. “But it’s actually not a good way to design a system . . . because it makes it more stochastic, more random.” It makes sense that there would be a system in place to ensure transcription isn’t simultaneously paused and initiated on the same gene, she says, but the mechanics of how the paused polymerase wards off new initiation remain to be elucidated.

Craig Kaplan, a molecular biologist at Texas A&M University, says this and other recent studies also make it clear that pausing can occur for very different lengths of time depending on the promoter. This helps give cells a “buffet of choices in how expression may happen,” he notes. “The regulation doesn’t have to be thought of as on or off; it may be how frequently you make a transcript, or whether you’re making your transcript in bursts, or whether you’re making transcripts evenly.”

But Patrick Cramer of the Max Planck Institute for Biophysical Chemistry in Göttingen, Germany, wants to see the results confirmed by other studies. “Occupancy changes are certainly an indication for changes in kinetics, but are not a proof, because occupancy can change either because the number of factors bound to DNA changes or because their residency time on DNA changes, or both,” he writes in an email to The Scientist.

“Transcription is an old field, and I think it’s often seen as, ‘Oh, it’s so well studied,’” says Zeitlinger. “[But] there are a lot of things we don’t understand. . . . There are so many open questions in the field that are quite fundamental.”