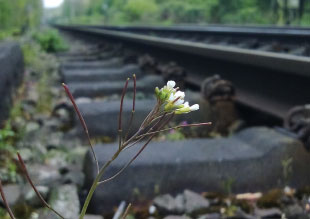 Staying alive
In the U.K. between 1957 and 1992, herbicides used along hundreds of kilometers of railway track provided strong selection for plants with a chloroplast mutation known to confer resistance. When geneticist Pádraic Flood identified herbicide resistance genes in Arabidopsis thaliana sampled in Cornwall—400 km from where they were first identified in 1988—he and his colleagues at the Max Planck Institute for Plant Breeding and Research saw a rare opportunity to study indirect, genome-wide effects of adaptive selection on an organelle.

Lucky association
Flood found that the adaptive mutation had arisen just once in railside populations of A. thaliana, and that these populations now had low...