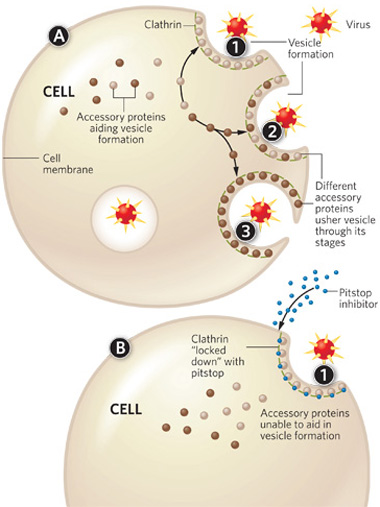 Blocked Swapping
A. The clathrin lattice forms at the site of membrane invagination (1). Underneath the lattice accessory proteins come and go (2), each driving a different step in the invagination and vesicle-forming process (3). B. When a pitstop binds clathrin (1), it prevents these accessory proteins from binding to clathrin, and endocytosis stops. PRECISION GRAPHICS

Clathrin-mediated endocytosis (CME)—by which cells ingest extracellular molecules and internalize cell surface proteins—is an essential process in practically all cells. Now, Volker Haucke of Freie Universität in Berlin and colleagues have identified two small molecules, which they named “pitstops” 1 and 2, that bind to clathrin’s terminal domain and stop CME. The inhibitors not only will help researchers elucidate clathrin’s molecular mechanisms, but could also serve as the basis for designing CME-preventing drugs for a variety of clinical applications.

“There are different ways to inhibit clathrin,” such as overexpressing or mutating accessory proteins,...

Haucke and his team found the two compounds after screening 17,000 small molecules for ones that could interfere with the protein-binding ability of clathrin’s terminal domain—thought to be an important interaction site.

The molecules were named pitstops 1 and 2 because, early in endocytosis, the plasma membrane folds inward and becomes sheathed in a clathrin lattice, forming what’s called a clathrin-coated pit. As the pit grows, more clathrin accumulates, coating the entire spherical structure.

While both pitstops 1 and 2 bind and inhibit clathrin in a similar way, only pitstop 2 is able to efficiently cross cell membranes. The team therefore used this molecule to see whether they could interrupt certain cellular processes requiring CME. Pitstop 2, they found, could halt HIV entry into cells, and could prevent the recycling of synaptic vesicles in neurons. Both the release of neurotransmitters and the internalization of neurotransmitter receptors on receiving neurons are mediated by clathrin-coated vesicles. Interfering with vesicle dynamics could thus modulate nerve cell transmission.

Pitstop 2 could have a number of useful applications, especially in basic research of cellular processes, but it will be a while before they’re ready for the clinic, says Haucke. “In order to be useful as drugs we would have to get better compounds that have [higher] binding affinities,” he explains. “That is something we are working towards.”