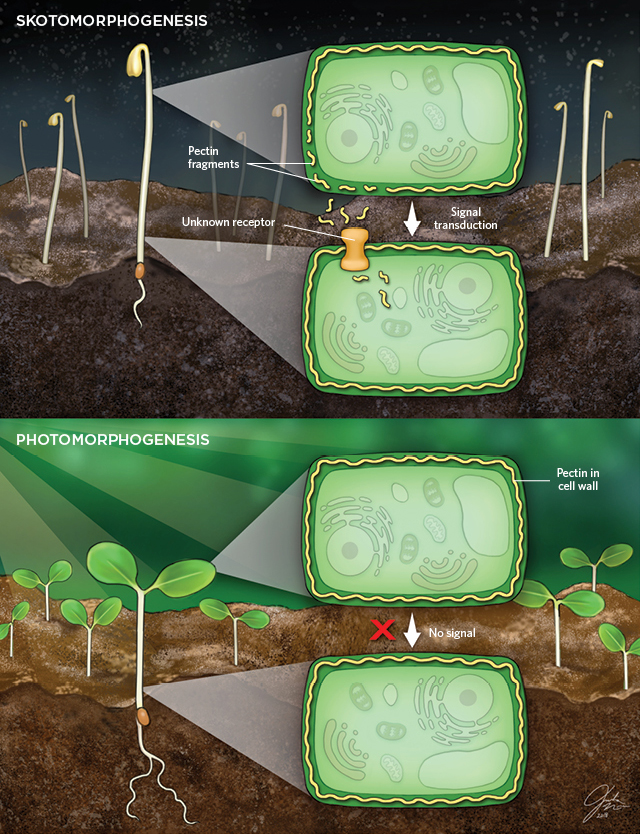 Plants don’t always need sunlight to grow. Through a process called skotomorphogenesis, seedlings germinated in the dark—say, too far under the soil surface—will stretch out into long, pale shoots, searching for light. Think of the spindly bean sprouts you might buy at the store, offers Ute Krämer, a plant physiologist at Ruhr-Universität Bochum in Germany. It’s an energy-saving tactic to get plants...

Krämer says that while the cellular components governing photomorphogenesis have been understood for decades, the cell-to-cell signaling pathways that determine the change in strategy from dark- to light-driven growth remain a mystery. How are light signals transmitted from the top of the seedling further down the plant so the switch from skoto- to photomorphogenesis can commence?

To find out, Krämer’s team made use of Arabidopsis mutants that use photomorphogenesis even in the dark, ending up with longer roots and fuller, greener leaves than they would through skotomorphogenesis. In these seedlings, the researchers found that pectin, a cell-wall component, had chemical modifications, including more methyl carboxyester groups and less acetylation.

Although the genetics and molecular mechanics of these mutants varied, the unifying theme was pectin alterations, and Krämer reasoned that these were responsible for allowing photomorphogenesis to proceed in the dark. By this logic, normal pectin components might be the signal that wild-type seedlings use to pass information about the absence of light to other cells. To test this idea, the researchers began supplying mutants with normal pectin fragments in their growth medium to see if they could restore skotomorphogenesis.

First they tried adding a chunk of pectin backbone called galacturonic acid, initially as a monomer. But nothing happened. So they tried a dimer. Again, no change. But once they gave the mutant seedlings a trimer of galacturonic acid, voilà—they looked just like normal plants that had been grown in the dark. “We believe that, in the dark, the plants generate this compound, and this compound is recognized by a receptor that then acts [through] signal transduction to repress the ‘light’ type of seedling development,” says Krämer, “and therefore the ‘dark’ type is maintained.”

Henrik Scheller, a cell wall biologist at Lawrence Berkeley National Laboratory, developed one of the mutants Krämer experimented with, though he was not involved in her study. He says pectin is known for its role in responding to pathogens, but he wouldn’t have predicted that it’s also involved in morphogenesis signaling.

“It opens a lot of new questions,” Scheller tells The Scientist. “And it’s not just incremental change in our understanding; it’s really a fundamentally new role for cell walls and cell wall–generated fragments that is very exciting.”