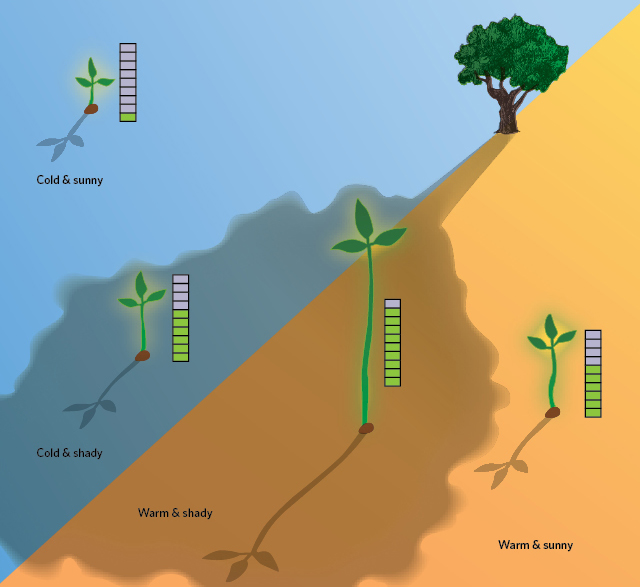 LIGHT SWITCH: The active form of the photoreceptor phytochrome B (phyB) suppresses stem growth in seedlings. In lab experiments, low light inactivates phyB, triggering growth. Warm temperatures turn out to also inactivate phyB, evidence that this pathway monitors temperature as well as light to coordinate growth. This may explain why plants grow the most in warmer, shady conditions compared to cooler shade, and why plants in full light—a growth-slowing condition—grow more if it’s warm.
© KIMBERLEY BATTISTA 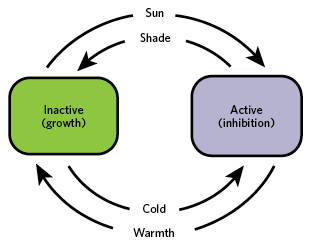 Researchers discovered in the 1930s that they could cause lettuce seeds to germinate just by shining red light on them. It turns out, as scientists later revealed, that the proteins responsible for this phenomenon are photoreceptors called phytochromes, now appreciated for their roles in regulating many...

The experiments were conducted on phytochrome B (phyB), which, like other phytochromes, is activated by red light but deactivated by light on the far-red end of the visible light spectrum. When turned on, phyB shuts off a class of transcription factors needed for stem growth in seedlings. If the seedling is in the shade of another plant—a potentially fatal situation—far-red light filters through the leaves and triggers a growth spurt.

Jorge Casal, a researcher at the Agricultural Plant Physiology and Ecology Research Institute in Argentina and a coauthor on one of the papers, initially hypothesized that phyB would be unaffected by changes in temperature. “We know that light signaling is very precise,” he says, which led him to suspect plants have evolved means to maintain that precision on warm days and cold days alike. But when he and his colleagues started searching for such imperturbability in phyB, they found the exact opposite.

Spectroscopic analysis of purified phyB revealed that warmer temperatures drastically accelerated the reversion of active phyB to its inactive form. The researchers grew Arabidopsis seedlings under varying light and temperature conditions. Turning up the heat deactivated phyB and spurred the seedling’s growth, tweaking the phyB pathway in much the same way as placing a plant in the shade.

The implication is that phyB serves not just as a light-detector but as a thermosensor, too. The discovery was reported simultaneously in another study by a team of European researchers, who identified the genetic regulation behind the phenomenon (Science, 354:886-89, 2016).

Previous work in Arabidopsis established that temperature influences various stages of plant development, but the mechanisms by which plants sense temperature has until now been obscure. The adaptive explanation as to why the phyB pathway responds to both temperature and light is not clear, Casal says. However, the effect of warmer weather on increasing growth is particularly strong in dim light, so it’s possible the system encourages shaded plants to capitalize on warm days in order to grow tall enough to escape the shade.

Christian Fankhauser, a University of Lausanne biologist who studies light signaling in plants, predicts that phyB is only one of many temperature-sensing pathways in plants, all part of the finely tuned apparatus that times every step of plant development. “A little seedling is a fragile thing,” Fankhauser says, so when it makes a break for open air, “you better do it at the right time.”