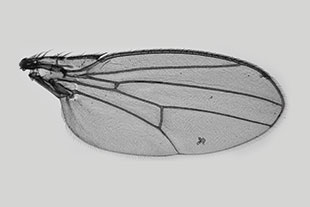 RIGID CONSTRUCTION: The wing vein patterns of two flies deviate from one another by a width no greater than half a cell.THOMAS GREGOR

The embryo
Multicellular organisms faithfully re-create the patterns of complex body structures from one generation to the next. Thomas Gregor’s lab at Princeton University previously showed that the initial body plan of three-hour-old fruit fly (Drosophila melanogaster) embryos varied, from one embryo to the next, by a total width no greater than half of a cell. This led Gregor to wonder whether wing patterns, which develop in 10-day-old flies, are just as precise.

The wing
Gregor and his colleagues used computer analysis and superimposition to measure and compare wing vein patterns in fruit flies....

Correction (September 16): In the original version of this article we mistakenly identified the flies under study as embryos, when in fact they were adults. The Scientist regrets the error.