ABOVE: EAVESDROPPING SEEDS: Arabidopsis seeds fail to sprout in the presence of a pathogen (left) as they normally would (right).
© UNIGE HICHAM CHAHTANE

A dormant plant embryo tucked away in a protective seed monitors the environment so it knows when to spring to life. The molecular signals activated by high temperature or insufficient light, for example, block germination via well-characterized pathways in plant cells. University of Geneva plant biologist Luis Lopez-Molina wondered if microbes living in the soil might also influence whether a plant sprouts. Studies show that some bacteria and fungi release compounds that block seed growth, “but they were always interpreted as toxic effects,” Lopez-Molina explains. “Another interpretation is that the seed senses this compound and mounts a response.”

Lopez-Molina and his colleagues grew various Pseudomonas species on agar plates, then added Arabidopsis thaliana seeds. One species, P. aeruginosa, prevented germination. To understand why, the researchers tested Arabidopsis mutants unable to synthesize a stress hormone known to be involved in blocking germination when the physical environment is unfavorable. Those mutants sprang to life even in the presence of the bacteria. “It means it’s not a toxic effect,” Lopez-Molina says.

Further experiments with a suite of Arabidopsis mutants identified a molecule called AMB that was produced by P. aeruginosa as the signal seeds use to sense the presence of the bacterium, and revealed that AMB apparently activates the same germination-control signaling pathway that responds to abiotic conditions such as high temperature.

AMB is known for its role in quorum sensing, small molecule–based communication typically initiated within bacterial populations when the environment gets crowded. Lopez-Molina and his colleagues hypothesize that the seeds eavesdrop on bacterial chatter to know if it’s safe to germinate.

“It’s still speculative, and we need more evidence, but if this story is right it means that seeds have taken advantage of bacterial communication,” says Hiro Nonogaki, a seed biologist at Oregon State University who was not involved in the research. “Seeds might be listening.” 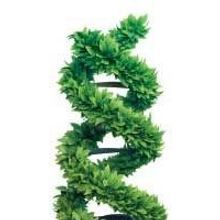