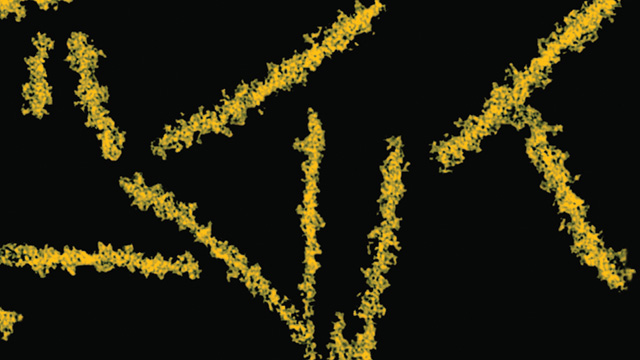 In trying to tease apart the signaling pathway that activates an innate immune response, Zhijian “James” Chen and colleagues at the University of Texas Southwestern Medical Center discovered that an intermediary mitochondrial protein called MAVS acts like a prion—activating other MAVSs and aggregating—and in this form potently initiates the next signal in the cascade that leads to innate cytokine production. This finding is the first report of a prion-like protein in mammalian cells.

A cell infected with an RNA virus such as influenza alerts other cells by activating innate immune pathways. A cytoplasmic receptor, RIG-1, detects viral RNA particles and activates the mitochondrial membrane protein MAVS, which...

Chen thinks that the prion-like activation and aggregation of MAVS proteins can amplify the signal from just a few molecules of activated RIG-1. By multiplying the next step, the activated MAVS convey a stronger downstream signal.

With such a simple way to amplify a signal, “one wonders how common this is in signal transduction,” says The Scripps Research Institute’s Bruce Beutler, as many signal transduction pathways could benefit from such an amplifying step.