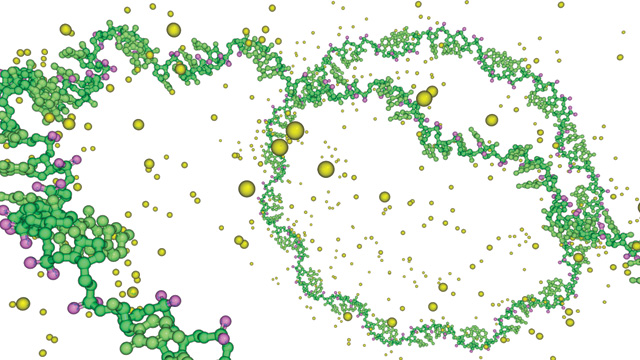 TAGGING FATE: Like the Moirai, the three fates in Greek mythology, the promoter sequence can decide the lifespan of some messenger RNAs (shown here) as they are first transcribed in the nucleus. SHUNYUFAN/ISTOCKPHOTO.COM

Researchers have long thought mRNA degradation by cytoplasmic nucleases occurred randomly. But when Robert Singer and colleagues at Albert Einstein College of Medicine in New York City traced the lives of two mRNA species from birth in the nucleus to death in the cytoplasm, they found that the fate of some mRNAs was decided by the promoter sequence that instigates gene transcription.

The researchers figured that there must be something in the genetic code that marked those mRNAs for rapid degradation, but when Trcek inserted pieces of code for longer-lasting mRNA into the SWI5 and CLB2 genes, nothing changed. However, when the promoter from the long-lasting mRNA was inserted at the front of the SWI5 and CLB2 genes, the normally short-lived mRNAs remained in cytoplasm into the beginning of the next cell cycle.

Evidence is mounting that the promoter plays a much bigger role in RNA processing than previously suspected, says Roy Parker of the University of Arizona. It's "the Greek tragedy model. The fate of the hero is determined at birth," says Singer, who is now interested in learning just how the promoter conveys instructions to the mRNA.