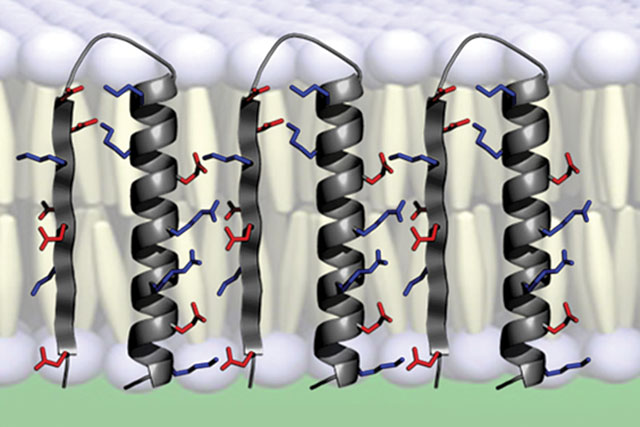 CHARGED LINKS: Transmembrane pore assembly may rely on subunits that fold via “charge zippers” made of salt bridges (red and blue side chains).COURTESY OF STEPHAN GRAGE AND ANNE S. ULRICH

The finding
TatA proteins are believed to come together to form large pores in bacterial membranes to transport folded proteins. But two of the protein’s segments are covered in positive and negative charges, which would make it difficult for them to penetrate the lipid bilayer—a process believed to be necessary for protein transport. Now, Anne Ulrich of the Karlsruhe Institute of Technology in Germany and colleagues report that corresponding charges on the two cytoplasmic segments of TatA align, effectively neutralizing each other, and allowing the formation of a membrane-crossing pore.