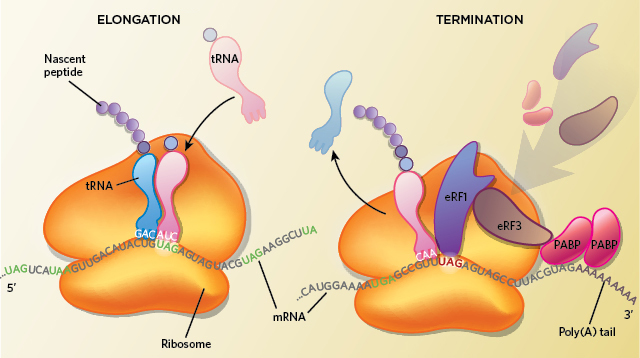 The genetic code—the digital set of instructions often laid out in tidy textbook tables that tells the ribosome how to build a peptide—is identical in most eukaryotes. But as with most rules, there are exceptions. During a recent project on genome rearrangement in ciliates, Mariusz Nowacki, a cell biologist at...

Ciliates, complex protozoans with two nuclei, are known to translate RNA transcripts in unorthodox ways. Nowacki’s team, however, discovered that Condylostoma magnum and an unclassified Parduczia species had gone even further, reassigning all of the traditional “stop” codons (UGA, UAA, and UAG) to amino acids. “It didn’t make sense in the beginning,” says Nowacki. “Nobody would expect that there would be a stopless genetic code.”

Puzzled, Nowacki’s team wanted to find out what the ciliates’ actual stop codons looked like. The group turned to transcripts of the ciliates’ histone proteins because their sequences are highly conserved across all eukaryotes. Using protein mass spectrometry and ribosome profiling, the researchers determined that the Parduczia species always interpreted UAA and UAG as glutamine codons, but read UGA as a tryptophan codon in some cases and as a stop codon in other cases. Even stranger, in C. magnum all three traditional stop codons functioned as either a stop or an amino acid signal.

“For the cells to survive, they have to be able to resolve this ambiguity,” says Nowacki. The data showed that the ribosomes somehow knew to interpret the same combination of three nucleotides as either “stop” or “go” in the appropriate context—so Nowacki’s team started looking for contextual clues.

The researchers discovered that the appearance of the ambiguous codons declined dramatically near the end of transcripts, cutting down on the potential confusion. Additionally, C. magnum and the Parduczia species had a remarkably short length of untranslated mRNA between the translated part of the transcript and the 3’ poly(A) tail, compared with other eukaryotes. The team suggests that proteins coating or interacting with the poly(A) tail may act as roadblocks to translation when the ribosome bumps up against them. In yeast, poly(A)-binding proteins have been shown to play a role in translation termination.

“I think it’s a very good explanation,” says Andre Cavalcanti, a molecular biologist at Pomona College in California, though it raises the question of whether the codon reassignment or the short untranslated region (UTR) evolved first. “Not every ciliate that reassigns the genetic code has UTRs as short as these, which seems to be a requirement of the model,”  he added in an email to The Scientist. “Different ciliates might adapt in different ways.”

To test its hypothesis, Nowacki’s team is planning to tinker with the length of the UTR in C. magnum. If the researchers can push the poly(A) tail farther away from the true stop codon, Nowacki predicts, they may see more readthrough.

“We were able to identify a novel biology in sea creatures, in creatures that were never looked at before,” says Nowacki. “It shows that [the genetic code] is not necessarily frozen and unambiguous.”