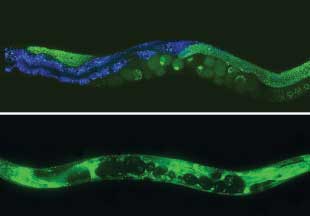 Oldies
Germline cells are considered immortal, because, unlike somatic cells, they can theoretically replicate indefinitely. In 2009, a study by Gary Ruvkun’s lab at Harvard Medical School reported that an insulin-deficient, long-lived Caenorhabditis elegans mutant, daf-2, misexpressed genes coding for germline factors called P-granules in its somatic cells—a result the team linked back to the mutants’ longevity (Nature, 459:1079-84).

Take two
The findings piqued the curiosity of C. elegans researcher and P-granule expert Susan Strome of the University of California, Santa Cruz. Interested in performing related research, she and her group set out to replicate the findings.

Missing pieces
Strome and colleagues searched for germline factors in daf-2’s somatic cells, but the researchers failed to find evidence of the proteins by immunostaining. They also didn’t detect an upregulation of germline transcripts. “Certainly our RNA profiling didn’t give us a sense that daf-2 has a little bit of misexpression in somatic cells,” Strome says. What’s more, knocking down P-granules and other germline factors in young adult worms using RNAi showed no effect on daf-2’s life span.

Not all worms are equal
The expression results might not contradict his team’s original findings, says Ruvkun; the discrepancy could have to do with life stage, given that part of the Harvard analysis focused on dauers (a spore-like developmental stage). “It’s an apples and oranges thing,” he says. “The induction we saw in these P-granule components was really quite striking.” But as for life span, he agrees the new analysis suggests that “there isn’t any evidence that germline granules are important for aging.” 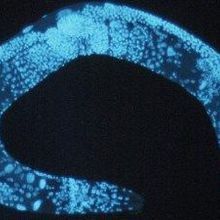