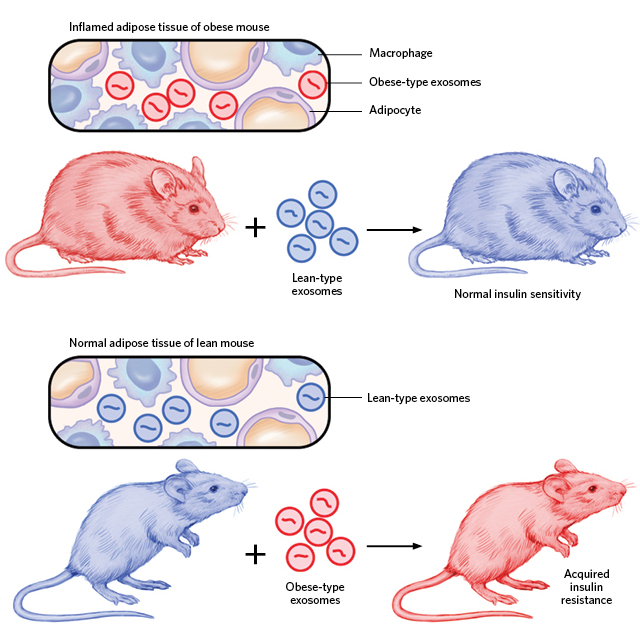 SIGNALLING INSTRUCTIONS: Obesity promotes insulin resistance via exosomal microRNAs, according to researchers at the University of California, San Diego. Macrophages associated with adipocytes in mouse fatty tissue package microRNAs into exosomes, which are released into circulation and are taken up by other cell types. When researchers treated lean mice with exosomes made by macrophages from obese mice, they found that despite remaining lean, recipient mice became insulin resistant. In contrast, treating obese mice with exosomes from lean mice improved the recipient animals’ insulin sensitivity, without reducing their weight.© LAURIE O'KEEFE

Jerrold Olefsky has spent much of the last decade trying to decipher the connection between obesity and the risk for type 2 diabetes. It’s now known that “in obesity, the adipose...

But a crucial piece of the puzzle has been missing. “Insulin resistance is a systemic thing,” Olefsky says. For inflamed fat tissue to trigger it, “somehow, all the tissues must talk to each other. We just didn’t know how.”

Research has not supported a major role for early suspects such as cytokines. But reading a paper a few years ago on the role of tiny vesicles called exosomes in intercellular communication in cancer, Olefsky was struck by the fact that, “Well, gee, all these cells make exosomes.” Known to carry microRNAs (miRNAs)—small nucleic acids that influence gene expression—exosomes seemed like plausible candidates for an inter-tissue communication system in obesity.

To find the responsible microRNAs, the team searched for differences in the exosomes’ contents. One microRNA that was more common in obese exosomes was miRNA 155, which targets PPARγ, a gene already well-known to Olefsky’s group. “When you stimulate [PPARγ], it causes insulin sensitivity; when you inhibit it, it causes insulin resistance,” he says. “We ended up showing that miRNA 155 is made by macrophages, does get into exosomes, does get into other tissues, and does inhibit PPARγ.”

The University of Oxford’s Fredrik Karpe, who studies the metabolic effects of obesity, notes that the team’s experiments were well carried out, but lack a link to humans. “The obvious thing would be to take a blood sample from humans and see if you have these exosomes,” he says, adding that there are likely many processes involved in the development of insulin resistance besides the one suggested here.

Olefsky agrees that microRNA 155 is not “the end of the story.” His team is now looking for other microRNAs in macrophage-derived exosomes, and exploring their potential as biomarkers or as inspiration for therapeutics. These tissues “were always talking to each other through exosomes,” he says. “We just didn’t know how to listen.”