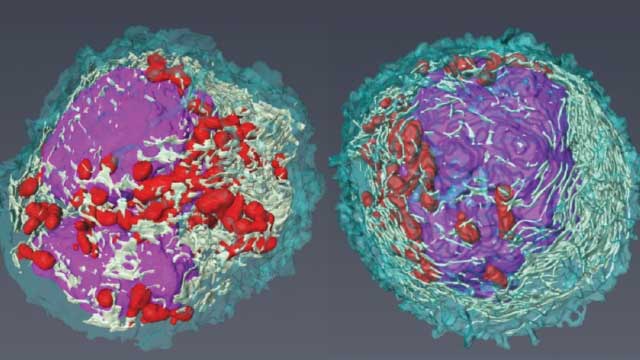 Hiding, not seeking
Dendritic cells and monocytes, essential pathogen-sensing immune watchdogs, fall into subtypes based on factors such as cell surface markers. But according to genomicist and immunologist Alexandra-Chloé Villani of the Broad Institute of MIT and Harvard, scientists only “use a handful of markers to define their favorite cell type,” potentially overlooking subpopulations with similar features but different functions.

New cell types
To redefine traditional cell subtypes, Villani and her colleagues isolated human dendritic cells and monocytes, sequenced the transcriptomes of individual cells, then grouped cells based on similar expression patterns. They then identified cell-surface markers that were highly and specifically expressed in each group, uncovering two new monocyte and three new dendritic cell subtypes along with a novel dendritic cell progenitor. Using their new markers, researchers isolated and resequenced fresh dendritic cells to confirm their results.

Jackpot
Among the newly characterized subtypes was a cell that had previously “hidden” among plasmacytoid dendritic cells (pDCs), known for producing interferons in response to viral invaders. Testing the functions of this new population, the team found that the cells potently activated T cells, while pDCs, on their own, did not.

A better approach?
“Single-cell transcriptomics methods are developing rapidly to become more scalable, robust, reliable, and affordable,” the Sanger Institute’s Sarah Teichmann, who was not involved in the work, told The Scientist in an email. This technology, Teichmann says, “is the method of choice” for studying cell type in immunology and beyond.