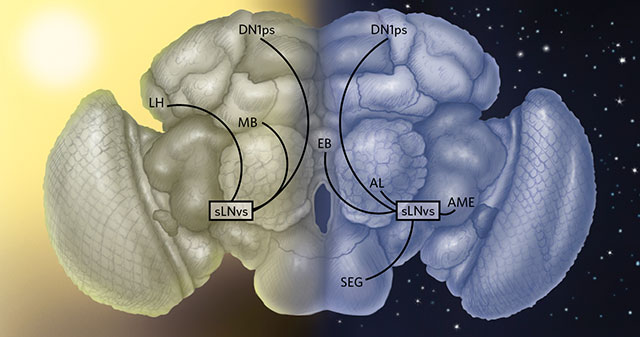 TIMED CONNECTIONS: Circadian neurons in Drosophila brains reveal considerable plasticity, breaking and creating connections with different parts of the brain over the course of a day. For instance, during the day, one group of circadian neurons known as sLNvs connects with other circadian cells called DN1ps and with noncircadian cells of the mushroom body (MB) and lateral horn (LH). At night, sLNv neurons maintain contact with DN1ps, but also connect with neurons in the ellipsoid body (EB), the subesophagic ganglion (SEG), antennal lobes (AL), and accessory medulla (AME), while losing contact with some daytime partners.© LAURIE O'KEEFE

Stripped of smartphones, watches, or a few days of sunshine, most animals’ bodies still follow an inner biological clock to demarcate day from night. This circadian rhythm dictates...

In Drosophila, this biological clock comprises 150–200 neurons nestled in seven clusters that include the small ventral lateral (sLNv) neurons. Researchers had known that these circadian pacemakers keep fly brains on a clock by rhythmically releasing chemical cues such as pigment dispensing factor (PDF) and other neurotransmitters. But in a 2008 study, María Fernanda Ceriani of the Leloir Institute in Argentina and colleagues found that these pacemaker cells also remodel their physical connections, forming more-complex ones during the day and significantly simpler circuits at night. The daily structural changes led Ceriani to wonder whether such physical contacts could also communicate time to neurons outside the clock.

To map synaptic connections, Ceriani and her colleagues labeled neurons with complementary fragments of a fluorescent protein; if two cells formed a synapse, the separate parts of the transmembrane protein snapped together and fluoresced under a microscope. The method, called GRASP, identified potential postsynaptic contacts formed early in the morning by axonal processes from sLNvs reaching out not only to other classes of clock neurons, such as posterior dorsal neuron 1 (DN1p) cells, but to neurons in noncircadian brain regions, such as the mushroom body, lateral horn, and the pars intercerebralis. Those processes then appeared to be pruned back overnight. In contrast, projections to DN1p cells remained constant throughout the day and night, while synapses made with another neuronal cluster were enhanced at night.

The data “strongly suggest that it’s not only the synaptic strength that changes throughout the day, but also that the synapses are selectively choosing different targets or inputs,” says neurobiologist Horacio de la Iglesia of the University of Washington in Seattle who was not involved with this study. He adds that the result “opens up a whole new idea of how the circadian clock communicates with the rest of the brain.” This daily formation and disassembly of synapses could drive rhythmic physiological processes, communicating the time of day to noncircadian parts of the brain, according to the authors. For instance, it’s known that the body responds to food differently throughout the day. (See “Out of Sync,” September 2013.)

Verifying how these dynamic synapses correlate with functional differences is the next step, says Ceriani. “If [they are functional], it certainly changes the way we think about plasticity. It means circadian neurons are parts of different circuits at different times of the day.”

In humans, the data may prove important to understanding the role of daily synaptic cycling in certain diseases, says Leslie Griffith of Brandeis University who was not involved with the study. If human circadian neurons form similarly fluid connections over the course of the day, she says, it could help “explain why many developmental disorders and neurodegenerative conditions such as Parkinson’s are associated with disruptions in sleep rhythms.”