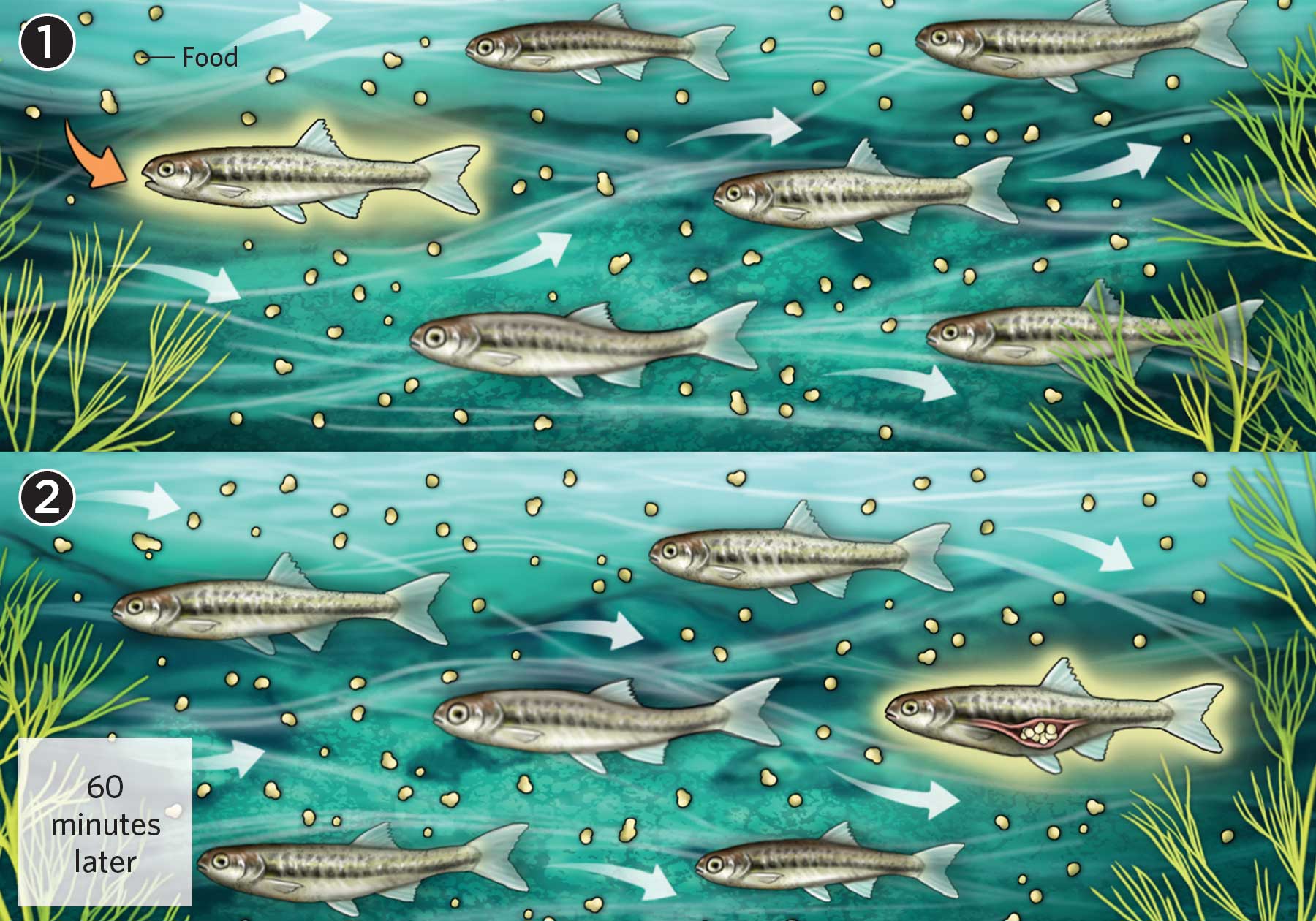 SWITCHEROO: Hungry minnows tend to swim at the front of the school and eat until they are full (top). Once the front swimmers have had their fill, they shift to the back of the school where they can expend less energy swimming and more energy digesting their food (bottom).

Lots of animals live and move in groups—elephants in herds, wolves in packs, birds in flocks, and fish in schools. “It’s nearly ubiquitous in animals,” says Shaun Killen, an ecophysiologist at the University of Glasgow in the U.K. Research has shown that where an individual is spatially located in the group can affect the benefits it gets from hanging...

Killen and his colleagues recently studied schools of Eurasian minnows (Phoxinus phoxinus) swimming in a tank against a current. Pieces of chow were constantly whizzing past the fish, and the team recorded how many each minnow ate and the fishes’ positions before and after eating. After calculating the metabolic costs of digesting each fish’s meal and comparing it to the fish’s position, the team observed a trend: fish that had just gulped down a big meal moved to the back of the school, even when they’d swum at the front at most other times. “Eating a big meal reduces the fish’s ability to swim,” Killen says. “It’s a relatable experience. If you’re going to run a marathon, you wouldn’t eat a pizza right before.”

It makes sense that feeding would influence individuals’ positions in a group, says Damien Farine, who was not involved in the fish experiments but studies collective behavior in birds from his post at the Max Planck Institute for Ornithology and the University of Konstanz in Germany. If a fish is hungry, it’s competing with others in the school to eat, and being at the front gives it access to more food. But once the fish is full, it doesn’t necessarily need to be at the front. In addition, “being at the back of the group is less energetically costly for a range of reasons,” Farine notes. “An individual at the back doesn’t have to contribute to navigating, and by relaxing the brain load it saves more energy.”

This observation aligns with other recent studies showing that individuals don’t position themselves in a group according to some preference or their observations about where other members are located, as researchers once thought. Animals can form emergent patterns without any individual having to organize this or even know it is happening, Farine says.

Killen says he’s been thinking about the pros and cons of being at the back of the pack, such as protection from predators and a boost from schoolmates’ slipstream. Changes in position, especially during the basic trade-off between feeding and movement, appear to influence group leadership, information transfer, and group decision making, he says. But the consequences of the trade-offs for group dynamics and survival are not yet understood. 