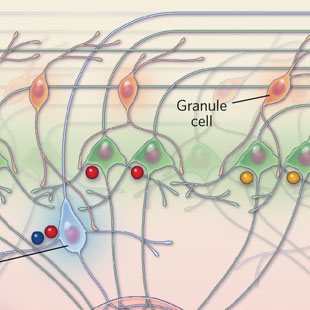 PARSING SMELL: Within every glomerular module, olfactory sensory neurons (OSN) activated by a particular range of odorants connect to a network of deeper, downstream neurons. Juxtaglomerular cells, located in the first layer (1), respond to a wider range of odorants than tufted cells, neurons in the next layer that relay signals to higher brain areas (2). Mitral cells, a type of neuron located in the deepest layer of the module, respond to even fewer odorants (3). The particular set of odorants that activate the mitral cells depends on the lateral location of each cell within this layer.
View full size JPG | PDF© SCOTT LEIGHTON

Although the human sense of smell is feeble compared to that of many animals, it is acute enough to...

In humans, the outer layer of the olfactory bulb, the most forward part of the brain, which lies atop the back of the nasal passage, is comprised of roughly 5,500 ball-like neural junctions called glomeruli. An individual glomerulus receives input from olfactory sensory neurons (OSNs), each of which expresses a particular odorant receptor that binds a range of molecules, and thus is activated by a specific set of odors. Within the glomerulus, those OSNs connect to a network of deeper, downstream neuronal layers to form a glomerular module, which somehow parses individual odors before signaling to higher brain regions.

The architecture and activity of this downstream network has so far eluded observation, however—so how the glomerular modules actually parse the information was unclear.

To tease apart the inner workings of these odor decoders, Shin Nagayama of the University of Texas Medical School in Houston and colleagues injected green calcium dye into the various individual cells that make up a single glomerular module in a living mouse. With a series of injections, they visualized the anatomical connections between different types of neurons. The team then compared the activity of the different types of neurons in each layer of the module.

Immediately surrounding each glomerulus is a mixed population of inhibitory and excitatory cells called juxtaglomerular neurons. After exposing OSNs to a combination of odors, the researchers noticed that the juxtaglomerular cells responded to a much wider range of odors than the next layer of neurons, made up of tufted cells, which were more discriminating. The last cell type, mitral cells, located furthest from the glomerulus were most selective, responding to just a few specific odor molecules.

The odor selectivity of neurons, or the range of individual odors they respond to, in the glomerular module “is sharpened in a gradient from surface neurons to those in deeper layers,” says Nagayama.

The mechanisms that govern odor response profiles remain unclear, but the results indicate that neurons in different layers of the module may undergo differing degrees of inhibition by surrounding interneurons called granule cells, says Nathan Schoppa, a neurobiologist at the University Colorado School of Medicine who was not involved in the study. “Juxtaglomerular cells, which display odor responses as broad as [those of] OSNs, may not be affected at all by this intrinsic circuitry,” Schoppa says, “whereas tufted cells and, then, mitral cells are increasingly affected.”

Regardless of the mechanisms, in terms of solving the problems confronted by the olfactory system, “the narrowing of the odor-tuning profile seen the most for mitral cells is likely to be important for helping the brain distinguish different but similar odors,” says Schoppa.