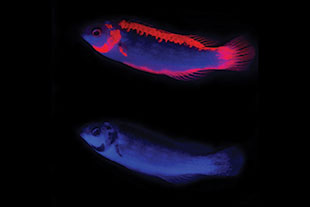 NOW YOU SEE ME: A filter that blocks red-wavelength light (bottom) masks the fluorescent pattern (top) and aggressive behavior of a male fairy wrasse.TOBIAS GERLACH

The context
Below about 20 meters depth, little to no red light penetrates ocean water. In 2008, Nico Michiels of the University of Tübingen in Germany and his colleagues demonstrated that, inexplicably, several species of fish emit unique red fluorescent patterns on their bodies, and some are able to see this wavelength. Michiels’s team next wanted to determine whether this has any functional significance.

The experiment
In an aquarium lit by monochromatic blue light, male fairy wrasses (Cirrhilabrus solorensis) responded to their reflections in a mirror by bristling their fins defensively or trying to...