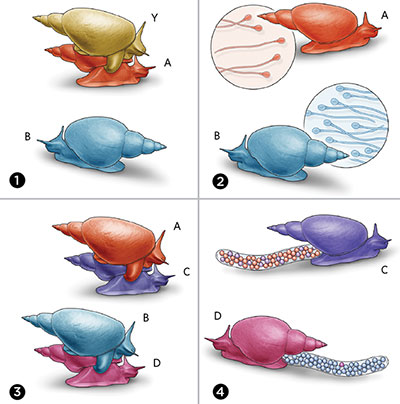 WHO’S YOUR DADDY: Seminal fluid proteins from the hermaphroditic snail Lymnaea stagnalis can reduce the sperm production and paternity success of mates. In experiments by Joris Keone’s group, snail Y inseminates snail A (1), subsequently reducing A’s sperm production compared to snail B, who has not mated (2). When A goes on to inseminate snail C (3), A ends up fathering a smaller percentage of C’s brood than when B mates with snail D, in which case snail B fathers nearly all of D’s brood (4). © SCOTT LEIGHTON

Although copulation is often brief, males of many animal species leave a lasting impression on their mates. The seminal fluid they deposit contains not just sperm, but proteins that can alter...

Ovipostatin, a seminal fluid protein (SFP) in the hermaphroditic freshwater snail Lymnaea stagnalis, cuts egg production in half in the sperm recipient, according to a 2010 study led by Joris Koene of VU University Amsterdam in the Netherlands. It’s been theorized that SFPs might also affect the sperm-producing capacity of recipient snails—their maleness—to reduce competition within a population. “It had been predicted . . . more than 30 years ago, but no one had properly tested it,” says Koene.

Using a sperm-counting method devised by the Koene lab, the team recently found that snails injected intravaginally with another snail’s SFPs produced, on average, less than half as many sperm in subsequent copulations as snails injected with a saline solution or with sperm alone.

The researchers then studied how many offspring mated snails actually sired. Snails that were inseminated by copulation the day before were allowed to mate with virgin snails. Koene’s group assessed the paternity of the latter snails’ offspring and found that the previously inseminated snails fathered 72 percent of them, meaning that 28 percent of the fertilizations came from the mother snail’s own sperm. A control group of uninseminated snails, in contrast, fathered close to the whole brood, 93 percent. This was the first time anyone had shown that semen from one partner could reduce the future success of a recipient’s male function.

“As a male sperm donor, you’re affecting how successful your partner will be in its next mating,” says Koene. What’s not clear is whether this process is instigated by the donor snail in an effort to reduce sperm competition, or by the recipient snail, shifting sexual strategies after receiving the sperm to focus on producing healthy offspring.

The team identified two seminal fluid proteins, LyAcp5 and LyAcp8b, each of which significantly suppressed sperm production in recipient snails. Other proteins that did not have much of an individual effect may still play a role in manipulating sperm production, says Joshua Auld of West Chester University in Pennsylvania. “I would like to see more about how those things function independently and in combinations,” he says, noting that these proteins could be working in concert to affect snail reproduction.

Combining this new insight with previous research in his lab on ovipostatin’s egg-reducing effect, Koene next plans to look at whether the offspring of snails with lowered egg and sperm counts have altered fitness. He speculates that lowered gamete numbers, allowing a higher investment in each gamete, might translate to healthier offspring.