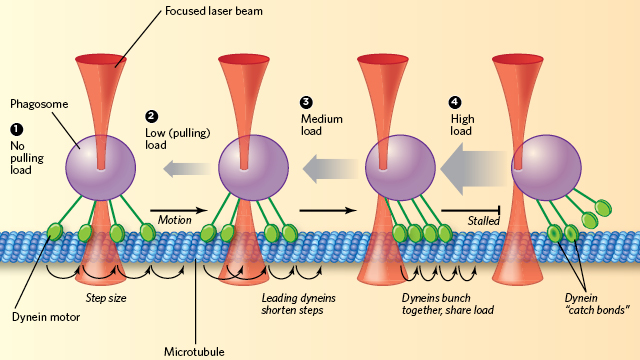 TEAM WORK: Dynein motor proteins carrying phagosomes along microtubules are weak individually, but strong when working in teams. As a group, dyneins usually take large steps when hauling cargo (1), but as a focused laser beam pulls the cargo in the opposite direction and load increases, the leading proteins shorten their steps (2). This allows trailing dyneins to catch up, meaning the individual proteins bunch together to better share the strain (3). Against even higher loads, dyneins activate “catch bonds,” attaching themselves to microtubules to ensure they don’t get ripped off the track (4).PRECISION GRAPHICS

Inside every cell is a busy transit system, with motor proteins carrying cargo back and forth on a network of polymerized protein filaments. The motor proteins traveling along...

To find out, Roop Mallik of the Tata Institute of Fundamental Research in Mumbai, India, and colleagues used optical tweezers to measure forces exerted in vivo by dyneins and kinesins, two types of motor proteins. With a focused laser beam, they trapped the cargo being carried—in this case, phagosomes containing latex beads—to effectively increase the load, and then measured at single-molecule resolution the forces generated by the motors to overcome this laser-induced resistance.

For kinesins, the stronger of the two proteins, adding a second motor didn’t significantly increase the force produced. But as the number of weaker dynein motors increased, the force generated rose in a linear fashion. “The kinesin motor is very strong individually but doesn’t work well as a team,” says Mallik. “Dynein is a very wimpy kind of motor on its own, but in numbers, these wimps become strong.”

The researchers then noticed that individual dyneins can shorten their step size and therefore slow down as the load they’re carrying increases. This sensitivity to load—not shared by kinesins—means that a dynein motor carrying more load than others in the team moves slowest, allowing the rest of the group to bunch up and therefore distribute the load more equally among individuals.

“[The authors] have shown that the reason dynein is able to behave well in teams is because it has the flexibility of a gear-like mechanism” that alters step size and speed in response to load, says Richard McKenney, a molecular biologist at the University of California, San Francisco, who was not involved in the study. “This mechanism is distinct to dynein, and likely allows it to participate in so many cellular functions.”

Dyneins appear to have another trick for tackling heavier loads: they activate “catch bonds”—attachments to microtubules that strengthen under increasing force. “This means they can become more tenacious under higher loads,” says Mallik, and do not get ripped off the track.

Taken together, Mallik’s insights suggest that dyneins may be uniquely adapted to work in large teams, allowing for the assembly of appropriately sized collectives to meet specific needs. This could explain the counterintuitive choice of a weak motor protein for the movement of large cellular cargoes such as phagosomes and endosomes, and for the separation of chromosomes, which also requires pulling with a large force. 