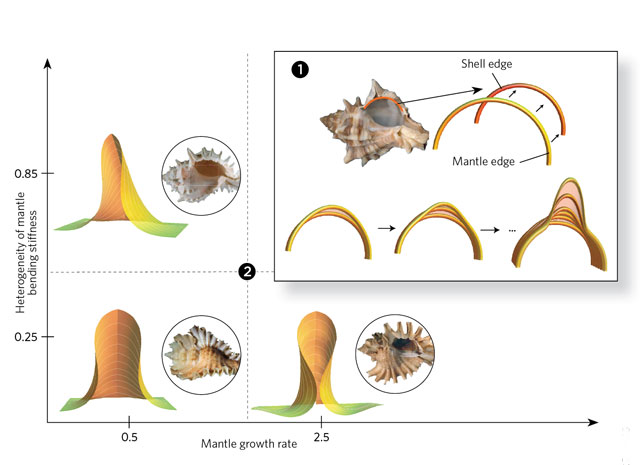 MODELING SPINES: Marine mollusks build their spiny shells with incremental secretions of material from the mantle, a cloak of soft tissue on the mollusk body. Researchers created a mathematical model for this process based on the mechanical deformation of the elastic mantle edge (yellow), which grows longer than the fixed shell edge (orange) and buckles when it temporarily attaches, before secreting new shell material into the deformed shape (1). Small variations in two parameters in the model—the growth rate and the heterogeneity of mantle bending stiffness at the mantle edge—accounted for a large diversity of spine structures
(2). IMAGES COURTESY OF DEREK MOULTON, REPRODUCED WITH PERMISSION FROM PNAS 110:6015-20, 2013

The spines adorning the shells of marine mollusks have evolved repeatedly across distantly related lineages, most...

To tackle that question, Derek Moulton of the Mathematical Institute at the University of Oxford and colleagues developed a mathematical model to predict how natural physical processes produce a diverse range of seashell spines.

Mollusks build their shells incrementally with secretions from an organ called the mantle, an elastic cloak of soft tissue lining the inside of the existing shell. The mantle’s leading edge emerges just beyond the shell edge and secretes a thin layer of leathery tissue called periostracum. The periostracum attaches to the shell edge, where it forms a mold for the deposition of calcium carbonate—also secreted by the mantle—which crystallizes to form the next increment of shell.

As the mantle grows and its leading edge gets longer than the shell edge, the resulting excess causes slight bucklings in the mantle itself and thus in the newly deposited shell edge. As the mantle gets longer, the bumps get larger, eventually forming the shallow grooves of a scallop, for example.

The researchers created a mathematical model to explain the formation of the more complex hollow spines and spikes of Murex snails and others, which protrude centimeters beyond the shell. Simply varying the growth rate of the mantle edge in the model changed the shape of short, folded spines but could not account for taller spines. But when the researchers incorporated variations in bending stiffness across the mantle’s leading edge, a more diverse range of shapes and sizes was produced.

“By changing these two parameters [stiffness and growth rate], we could produce a fairly wide spectrum of spine morphology,” Moulton says. Little is known, however, about the genetic or molecular mechanisms controlling these conditions, he adds.

The research builds on previous work, says Bard Ermentrout of the University of Pittsburgh, who was not involved in the study, by assuming “the mantle has certain weaknesses, so that it is possible to get much sharper spines.” Those areas of weakness must be arranged in a particular pattern to account for a particular shell shape, adds Moulton, but “understanding the details of that initial pattern and how it propagates and amplifies into spines is an open problem.”

Nevertheless, Moulton says that finding a generic physical mechanism by which spines are formed could shed light on how these structures have repeatedly emerged across different lineages. “We are much closer to understanding the convergent evolution if we reduce the problem to understanding why certain mollusks would have a slightly different growth rate and/or mantle stiffness.”