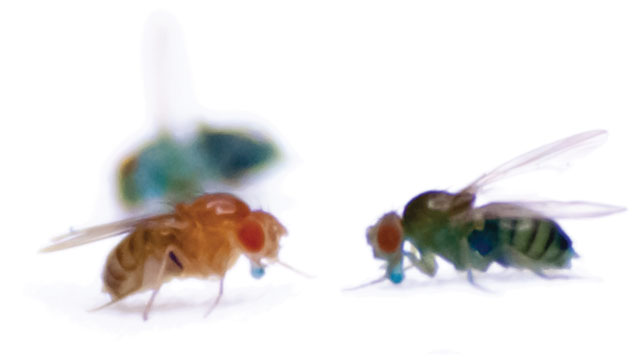 A DEATHLY HUE: Flies given meals tinted with blue dye turn that color about a week before death.COURTESY OF MICHAEL RERA

The question
Aging is marked by the accumulation of wear and tear on the body’s organs and tissues, but the specific kinds of damage that usher in death are still unknown. David Walker and his colleagues at the University of California, Los Angeles, suspected that the intestines may play a key role. In previous studies, when energy metabolism in the intestines was boosted, the flies’ lifespan increased.

The finding
Walker and his colleagues tested intestinal integrity by feeding the flies food tinted with blue dye. Although they saw no effect of the dye on food intake, they did notice that older flies turned blue about a week before death. Researchers discovered that the “Smurf” phenotype, as they called it, resulted from the breakdown of the intestinal barrier and the leakage of the blue dye into the hemolymph—the fly equivalent of blood—during digestion.

The connections
After confirming that intestinal barrier defects could be detected with additional dyes, the researchers found that the Smurf phenotype was an even better predictor of impending death than the flies’ actual age. Moreover, the researchers found that the phenotype was correlated with other aging-related markers, such as increased inflammation and insulin resistance.

The significance
Though Walker is quick to point out that their study doesn’t explain whether intestinal barrier breakdown is the cause or effect of inflammation or insulin resistance, the data suggest that the intestinal barrier is indeed important in aging. “It’s a nice demonstration that the gut is a critical tissue for longevity,” says Heinrich Jasper of the Buck Institute for Research on Aging, who was not involved in the study. 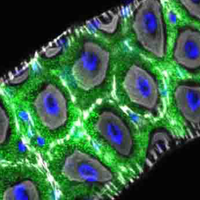