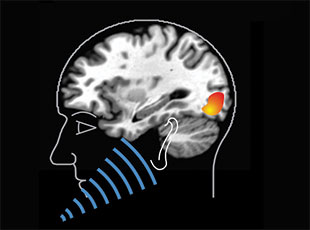 SOUND AND VISION: A noise activates the visual cortex (colored spot), which helps a viewer identify an object at the sound’s source. WENFENG FENG

The context
Noticeable sounds activate neurons in the visual cortex, helping us make out visual targets at the location the sounds came from. Wenfeng Feng of SooChow University in China and colleagues last year observed neural correlates of such sensory tag-teaming in human brain recordings: an activation in the visual cortex of the brain hemisphere opposite the source of the sound, called the auditory-evoked contralateral occipital positivity (ACOP).

The experiment
To figure out how ACOP functions, Feng’s group used electroencephalography (EEG) to study the performance of 16 volunteers. Each participant heard a noise from a speaker on the left or right side of a monitor, after which the letter T or L flashed on one side of the screen. The sounds and letters were paired at random, and the participants were asked to identify the image.

The results
Sound from one side of the monitor improved the volunteers’ discrimination of letters flashed on the same side of the screen. ACOPs before correct answers were stronger than those before incorrect ones, and were localized to Brodmann’s area 19, a portion of the visual cortex linked with shape recognition and feature extraction. The researchers “show that the magnitude of ACOP can actually be used to predict participants’ subsequent performance on visual discrimination,” Philip Tseng, a cognitive neuroscientist at National Central University in Taiwan, says in an e-mail. “It is pretty cool.”

More questions
Feng is now probing deeper into the mechanisms of sound’s effect on vision. “What are the brain rhythm activities of the activation of visual cortex by sound? Are they the same as the activities activated by visual cues?” 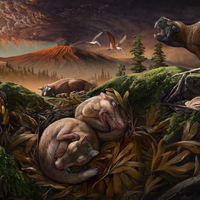 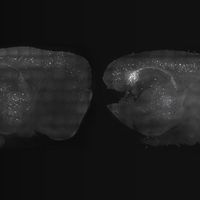