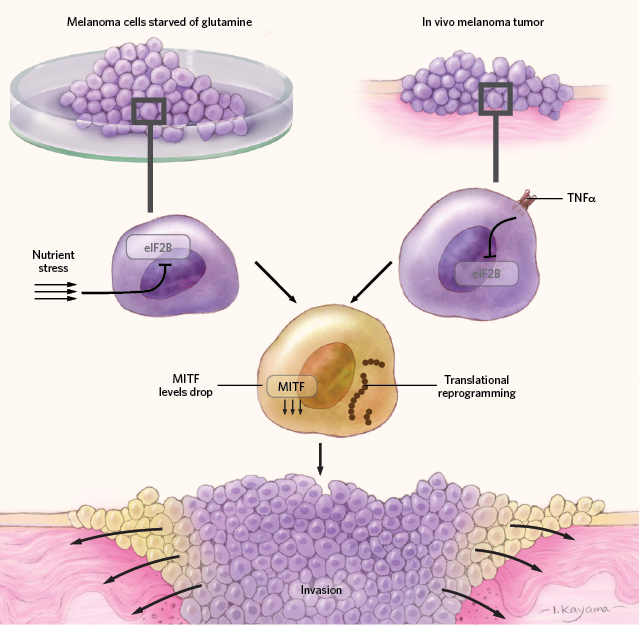 GOING AWOL: The tumor microenvironment can trigger an intrinsic starvation response that switches melanoma cells from a proliferative to an invasive state, according to work from researchers at Ludwig Oxford. In cell culture, nutrient stress leads to inhibition of translation factor eIF2B, triggering translational and transcriptional suppression of proliferation-associated protein MITF, plus large-scale translational reprogramming. The researchers show that TNFa, a cytokine released by immune cells in the tumor microenvironment, also triggers this pathway, suggesting an explanation for how melanoma cells become invasive in vivo even when food is abundant.© IKUMI KAYAMA/STUDIO KAYAMA

In melanoma, tumor cells generally adopt one of two phenotypes: proliferative or invasive. A switch from the first to the second often leads to metastasis...

A recent clue came from his lab’s discovery that human and mouse melanoma cells are particularly sensitive to glutamine, which is often low in melanoma tumor cores. Supplied with the amino acid, cultured cells ramped up levels of a transcription factor, MITF, associated with melanocyte proliferation. But when cells were starved of glutamine, MITF levels dropped and cells became invasive. “This got us thinking: Why is glutamine so important?” says Goding. “What’s it doing?”

To find out, Goding and his colleagues took a closer look at gene-expression patterns from glutamine-starved cells. They found that, in addition to lowering MITF levels, starvation triggered large-scale translational reprogramming via inhibition of translation initiation factor eIF2B. Artificially inhibiting eIF2B—mimicking starvation—induced invasiveness in melanoma cells, while using drugs to render the protein insensitive to inhibition prevented invasiveness even in low-nutrient conditions.

This response is intuitive, Goding notes. “It’s what other organisms do,” he says. “Bacteria become invasive when they starve, yeast put out hyphae. Maybe invasion in general is a property of cells which are starving.” Indeed, similar invasion-promoting reprogramming mechanisms, the researchers showed, operate in yeast, which lack MITF but possess eIF2B. Under nutrient stress, wild-type yeast invaded agar gel, while mutants with disrupted eIF2B interactions did not.

Although the findings suggest evolutionary conservation of invasion drivers, they don’t tell the whole story; melanoma, Goding explains, can become invasive in vivo even in nutrient-abundant conditions. So the team began searching for signals in the tumor microenvironment that might trigger the same response, independent of food supply.

And that’s not all. The team also found that cells with this invasive phenotype showed gene-expression profiles consistent with a poor response to certain immunotherapies—a result that may help to explain why some of these treatments are ineffective in a substantial number of patients.

The findings add to an “integrated picture” of melanoma progression, says Corine Bertolotto of the French National Institute of Health and Medical Research. Although steps in the pathway are still missing, “the authors are pulling together complex parts of the puzzle.”