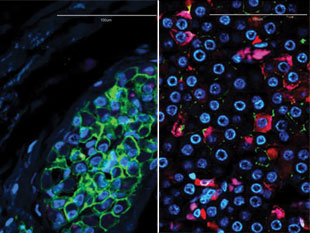 The states
Cancer metastasis is thought to rely on tumor cells losing their polarity and their connections with neighbors, enabling them to migrate and invade other tissues—an epithelial-to-mesenchymal transition. The reverse process—the mesenchymal-to-epithelial transition—then allows cells to set up shop in a new tissue. Cancer stem cells can express genes associated with both pathways, but there have been conflicting findings about the relationship between stemness and these transitions.

The finding
Cancer biologist Max Wicha of the University of...