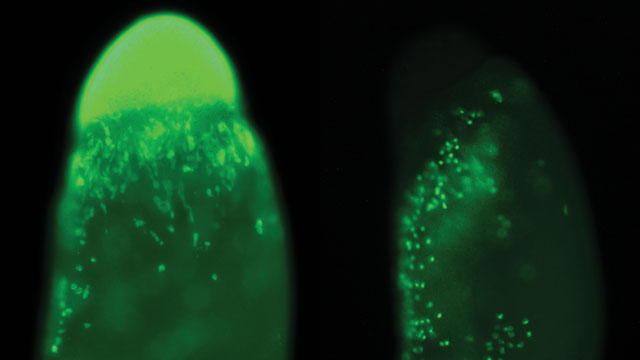 The finding
Excess free-floating histones are toxic to cells. Yet researchers have observed massive stores of maternally supplied histones, bound to lipid droplets, in Drosophila embryonic cells. To understand the function of these fat-associated histones, Michael Welte of the University of Rochester and his colleagues disrupted the synthesis of new histones in fly embryos and found support for the idea that lipid droplets help the embryo safely store the excess pre-made histones for times of need.

The partner
By purifying the droplets and isolating the associated proteins, Welte’s group identified a new protein, Jabba, which anchors histones to lipid droplets. When they engineered embryos that lacked Jabba, they found that lipid droplets were devoid of histones. Surprisingly, the embryos developed normally, illustrating that new histones made by the embryos were sufficient to keep them alive.

The conservation
Akash Gunjan at Florida State University who was not involved in the study says that the rainy-day storage function of lipid droplets makes sense for organisms whose swift development doesn’t allow a lot of time for translation. “It’s a good idea for them to have a ready-made store of histones that they can quickly make use of for the rapid embryonic cell cycles,” he says.