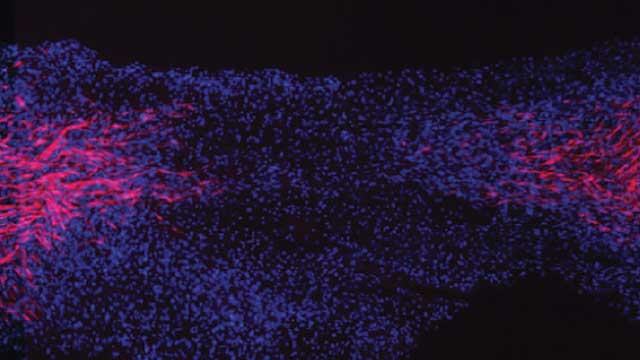 To protect and repair
In the peripheral nervous system, axons are able to mend themselves after injury thanks to Schwann cells, a type of glial cell responsible for producing myelin, the fatty substance that wraps around some nerve fibers. Schwann cells migrate to the injury site and help guide the regrowing axons through a connective-tissue bridge that forms across the gap.

Dual identities
Prior studies have shown that while aiding repair, Schwann cells transition from a myelinating phenotype to a progenitor-like state. This switching is similar to what happens when adult cells are genetically reprogrammed into induced pluripotent stem cells for use in regenerative medicine, says Simona Parrinello, a cell biologist at Imperial College London. “But instead of being forced experimentally, it happens naturally.”

Molecular markers
To identify the molecular changes that accompany this transition, Parrinello and her colleagues isolated Schwann cells from both severed and intact mouse nerves and characterized their transcriptomes. The analysis revealed that Schwann cells in the injured area were more proliferative and invasive, and displayed gene expression patterns that were more stem cell–like than those from unaffected parts of the nerve.

Cancer connections
“Schwann cell tumors usually arise from injury sites, and this is probably why,” says Haesun Kim, a biologist at Rutgers University who was not involved in the work. These findings could also have implications for regenerative medicine, Parrinello adds. “If we understand how a cell does this as part of a normal regenerative process, we might be able to understand what we need to do [to make] experimental reprogramming more efficient.” 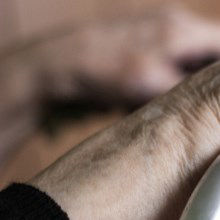