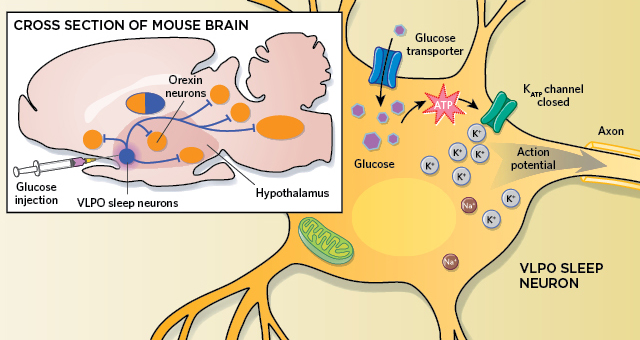 That drowsy feeling after a big meal—the so-called food coma—may actually be the result of increased neuronal activity. New research in mice...

“What [the researchers] show is that these ventrolateral preoptic neurons are glucose responsive, and they show that in times of high glucose, they fire more,” says Harvard University neuroscientist Clifford Saper, who was not involved with the study. “If you’ve ever had a big meal, and you get sleepy afterward...this may be part of the reason why.”

About 20 years ago, Saper discovered that sleep-promoting neurons within the VLPO usher the brain into the first stage of the sleep cycle, slow-wave sleep, by inhibiting the organ’s arousal systems. When awake, these arousal systems inhibit VLPO sleep neurons. This two-way inhibition, says Saper, ensures that we are either awake or asleep, depending on which set of neurons has the upper hand, but that we spend little time—often just seconds—in between.

One such arousal system is a group of hypothalamic neurons that release neuropeptides called orexins (also known as hypocretins); loss of orexin neurons in humans leads to narcolepsy. Researchers have shown that glucose inhibits orexin neurons in vitro, inspiring Thierry Gallopin at ESPCI ParisTech in France to investigate how glucose affects the sleep-promoting neurons of the VLPO. “If glucose is able to inhibit this arousal system, my hypothesis is that glucose could, in turn, excite sleep-promoting neurons,” says Gallopin.

So Gallopin and his colleagues injected glucose—in concentrations at or beyond physiological limits—into the VLPOs of mice and monitored their sleep for two hours. The mice fell asleep faster and slept longer after an injection with glucose than they did after being given a glucose-free solution.

Brain-slice experiments revealed that VLPO sleep neurons fire more in the presence of glucose. More specifically, it’s the energy molecule ATP, a product of glucose metabolism, that is responsible. These cells contain potassium channels that close in response to ATP, thereby making the neurons fire more readily. This leads to the inhibition of orexin neurons and other arousal regions of the brain.

With its arousal centers quieted, the brain goes to sleep. “The slow waves seem to be the natural state of the brain if it is not being stimulated,” explains Saper in an email. Previous studies have shown that a slab of cortex disconnected from the rest of the brain will enter a slow-wave state spontaneously. This scenario isn’t quite the same as sleep, Saper adds, given that the brain sample cannot wake up. “A slow-wave state that cannot be interrupted would more accurately be called a coma.”

Thankfully, a “food coma” is less a catatonic state and more the result of a brain sent off to sleep by a molecular lullaby.