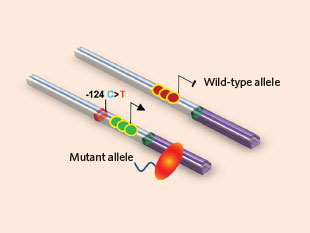 The foundation
Chromosome ends are slightly shortened with each DNA replication. Terminal repetitive sequences called telomeres buffer coding DNA from this fate. In stem cells, telomerase extends the telomeres so that cell division can continue, perhaps indefinitely. In somatic cells, telomerase is inactive in part because the gene encoding telomerase’s catalytic sub­unit, telomerase reverse transcriptase (TERT), is epigenetically silenced. In most cancers, however, telomerase is again turned on and aids proliferation.

The mutations
In 2013, researchers found two mutations in the TERT promoter that occur frequently in cancer cell lines and are tied with...

Application
“Telomerase is a fantastic therapeutic target for cancers because so many cancers are absolutely reliant on telomerase,” says Stern. “These TERT promoter mutations only occur in cancer, so if we can understand the mechanism, then we can potentially develop a highly specific cancer therapeutic.”