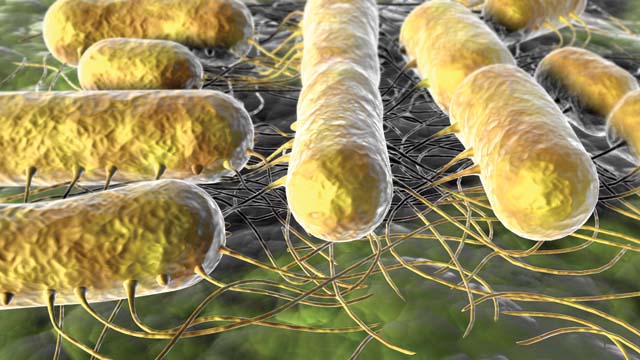 When the Salmonella bacterium infects eukaryotic cells, it becomes encased in membrane-bound vacuoles. How it escapes from these vacuoles and infects other cells was a mystery until now. Olivia Steele-Mortimer and colleagues at NIH’s National Institute of Allergy and Infectious Diseases in Hamilton, Montana, found that these bacteria don’t all behave the same way, even when infecting the same cell—and that very few actually escape the vacuoles at all.

First author Leigh Knodler noticed “balls of cells” sitting on top of the monolayer of cultured Salmonella-infected gut epithelial cells in electron micrographs. These epithelial cells had been extruded from the monolayer and were laden with bacteria swimming free in the cytosol. This bacterial population, however, divided...

The researchers found that only a small number of bacteria manage to escape the vacuole, probably through transient defects in membrane assembly. Once free, they express virulence-associated genes, grow much faster, and ultimately force their host cell out of the epithelium. The host cell suffers inflammatory cell death, releasing the bacteria into the lumen of the gut.

“The big challenge,” according to F1000 Member Francisco Garcia-del Portillo, is to find out how individual bacteria decide their fate. Knodler is trying to answer this question by identifying the signals Salmonella uses to escape into the cytosol and become this virulent, rapidly replicating form.