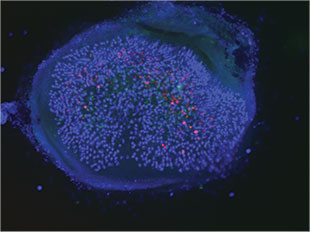 Regeneration
In mammals, hair cells of the utricle (the inner ear organ that senses gravity and maintains balance) can regenerate to some extent after damage, unlike hair cells in the cochlea. Despite evidence in neonatal mice that hair cells’ neighbors, called supporting cells, can differentiate into hair cells, tracking the origins of new hair cells could not be done until Alan Cheng of Stanford University and his team developed a genetic marker based on a gene, Lgr5, that responds to hair cell damage.

Damage control
The researchers found that Lgr5 expression in supporting...